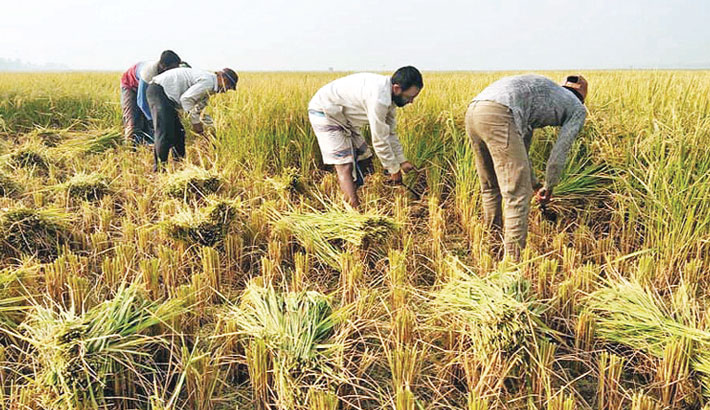 Farmers and labourers are busy harvesting Boro paddy. The photo was taken from Raninagar area in Naogaon district on Tuesday. — PBA Photo

NARSINGDI: Harvesting of Boro paddy has begun in all six upazilas of the district though it will get full momentum from the first week of May.

Concerned experts, officials of Department of Agriculture Extension (DAE) and farmers are expecting a bumper production of paddy as the crop has grown excellently well under the favourable climate condition everywhere in the district this year.

The enthusiastic farmers are now busy harvesting their cash crop. They hope that the prevailing climate condition would help them to harvest the bumper Boro yield this year, reports BSS.

Deputy Director of the DAE, Narsingdi Shovan Kumar Dhar said that the DAE has fixed a target of producing 2,15,000 tonnes of Boro rice from 55,300 hectares of land. But production of Boro might cross the target as the farmers finally cultivated 55,350 hectares of land in the district.

Besides, the Boro plants grew superbly this time under favorable climate conditions and there was no major incident of pest attack in the district during the time. He hoped that if the climate does not turn hostile, over 2,25,000 tonnes of Boro rice are expected to be produced in this year here.

The local DAE provided logistic support including seed and fertilizer and other necessary equipment to the farmers for Boro cultivation. Farmers Abdur Rahman and Haripad Das of Sadar upazila and Abdul Ali and Brijan Roy of Shibpur upazila said they have already started to harvest their Boro paddy and are getting excellent production.

The farmers have expected that they will complete their harvesting within this month.