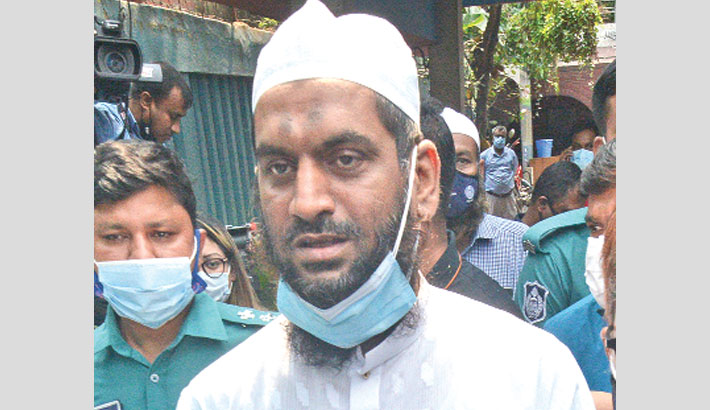 Police in a raid on Sunday arrested Hefazat-e-Islam joint secretary general Mamunul Haque from a madrasa in the capital’s Mohammadpur area on Sunday.

A large number of law enforcers surrounded the madrasa during the raid which started around 12:30pm.

Teachers and students of the madrasa tried to obstruct the police drive. Later, the Hefazat leader was arrested from a room on the first floor of the institution.

Following the arrest, Deputy Commissioner of Tejgaon division police Harun-or-Rashid at a press briefing said, “Mamunul has been arrested in a vandalism case filed with Mohammadpur police station

in 2020. We’re investigating the case filed over vandalism by Hefazat men. We’ve found evidence that Mamunul was involved in the incident.”

There are also several more cases filed against Hefazat leader Mamunul in Motijheel, Paltan and Narayanganj police stations, he said.

Mamunul will be produced before court today, the police officer added.

The DC said Mamunul gave a provocative speech during Hefazat’s mayhem in 2013. At several recent programmes, he also instigated people to attack police stations, police outposts and other establishments across the country.

The police official also said Mamunul was under watch following the recent Hefazat attacks across the country.

Mamunul Haque came into limelight after he was found with a woman at a resort in Sonargaon on April 3.

A case was filed against Mamunul in connection with the March 26 clashes and violence in Baitul Mukarram area in the capital during Indian Prime Minister Narendra Modi’s Dhaka visit. He is one of the 17 people accused in the case filed with Paltan police station.