Iceberg that became a social media star melts away 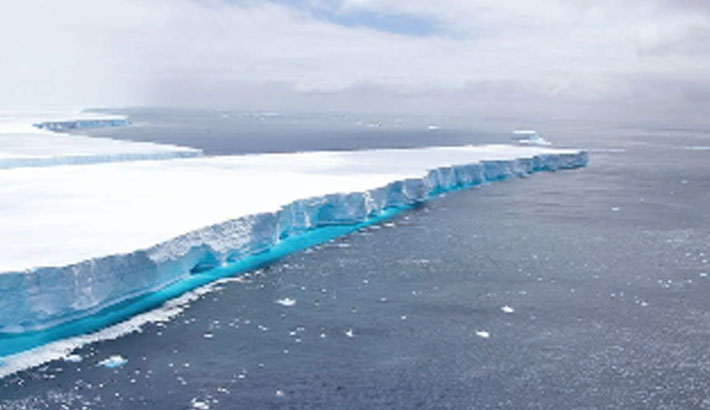 The iceberg that was for a time the biggest in the world is no more.

That’s like a small country; it’s equal to a quarter of the size of Wales.

But satellites show the mega-berg has now virtually gone, broken into countless small fragments that the US National Ice Center says are no longer worth tracking. A68 calved from the Larson C Ice Shelf on the edge of the Antarctic Peninsula,

and for a year it hardly moved. But then it started to drift north with increasing speed, riding on strong currents and winds.

The billion-tonne block took a familiar route, spinning out into the South Atlantic towards the British Overseas Territory of South Georgia. The small island is where many of the biggest icebergs go to die. Caught in the local shallows, they are doomed to gradually melt away.

But this one somehow managed to escape that particular fate.

Instead, it was the waves, the warm water and higher air temperatures in the Atlantic that eventually consumed A68. It simply shattered into smaller and smaller fragments.

“It’s amazing that A68 lasted as long as it did,” Adrian Luckman, from Swansea University, told BBC News.

“If you think about the thickness ratio - it’s like four pieces of A4 paper stacked up on top of one another. So this thing is incredibly flexible and fragile as it moved around the ocean. It lasted for years like that. But it eventually broke into four-to-five pieces and then those broke up as well.”

A68 will probably be best remembered as the first iceberg to become a star on social media.

People around the world shared satellite pictures online, especially as the frozen block neared South Georgia. Had it grounded, the berg’s immense bulk could have disrupted the foraging behaviour of the island’s many penguins - and who isn’t worried about penguins in peril?

The daily conversation on the likes of Twitter and Instagram was made possible by today’s easy access to a suite of publicly available space data tools.

“A68 caught the attention of a lot of different people,” commented Laura Gerrish, a mapping specialist with the British Antarctic Survey (BAS). “We saw every little twist and turn. We were able to follow its progress with daily satellite images, at a level of detail we’ve not really been able to do before.”

Of course, the iceberg wasn’t just an object of wonder; it was also the target of some serious scientific investigation.

Its place of origin, Larsen C, is an enormous floating platform of ice, built by the merging of glacier tongues that have slid off the land into the ocean.

A68’s life story will almost certainly tell researchers something both about how ice shelves are constructed and how they break apart to produce icebergs.

“The one thing that is probably worth mentioning as a scientific result was how much was learned about the fracture toughness of the suture zones where inland glaciers joined together to form the floating shelf ice,” commented Christopher Shuman from the University of Maryland, Baltimore County (UMBC) and Nasa-Goddard.

“Because we had new sensors seeing the rift evolution more frequently, I’m sure useful insights were gleaned that could not have been ‘seen’ in the decade before. This is a real testament to the investments being made in Earth observation.”

Most glaciologists regard A68 as the product of a very natural process. Ice shelves will maintain an equilibrium, and the ejection of bergs is one way they balance the accumulation of mass from snowfall and the input of more ice from the feeding glaciers on land.

So in that sense, A68 cannot be presented as a poster child for human-induced climate change.

All that said, A68 did showcase the sorts of processes through which warming can destroy ice structures.

One of these is what’s termed hydrofracturing. In this process, warming produces a lot of surface meltwater that then fills fissures and cracks, driving these openings through to the base of the ice.

There were some spectacular examples towards the end of A68’s existence where hydrofracturing turned remnant fragments to mush almost overnight.

“’Death by hydrofracture’, ‘slush puppies’,” Ted Scambos called it. “Another example of iceberg fast-forward evolution, showing us how ice shelves might collapse in a warmer world. I guess the iceberg tested a lot of supposed knowledge, and the knowledge mostly stood up to the challenge,” the CIRES-University of Colorado Boulder expert told BBC News.

BAS also put a couple of robots in the ocean in February to try to study up close some of A68’s latter-day segments.

One went missing soon after, and the other actually got stuck under the ice for two weeks before managing to free itself and continue its observations.

This robot will be recovered in May to pull down its data. It should reveal information about how icebergs affect their surroundings by, for example, dumping huge volumes of fresh water into the ocean as they melt.

The USNIC is the body recognised internationally for naming icebergs and tracking those that might pose a threat to shipping.

To make it on to the USNIC list of concern, a berg must either have a long-axis of greater than 10 nautical miles (18.5km) or an area of at least 20 square nautical miles (68.5 sq km).

None of A68’s fragments now qualify. The last major piece, known as A68a, was measured on Friday to be just 3 nautical miles by 2 nautical miles. RIP.