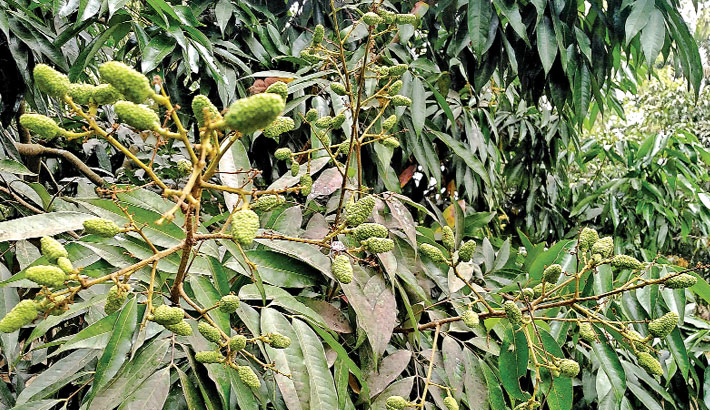 The photo shows a budding litchi tree in Parail Union under Raninagar Upazila of Naogaon district. The photo was taken on Saturday. — Sun Photo

RANGPUR: Healthier growth of tender litchi amid favourable climatic conditions predicts a bumper production of the juicy fruit in all five districts of Rangpur agriculture region.

Officials of the Department of Agricultural Extension (DAE) said outstanding blossoming in litchi trees followed by smooth formation of tender fruit has made farmers happier and more hopeful of reaping huge profits this year.

They said more 95 percent of litchi trees in small, medium and big-sized litchi orchards and homesteads on over 1,850 hectares of land have bloomed massively this season in the region where the fruit formation continues smoothly now, reports BSS.

Talking to the agency, litchi grower Hasanul Haque of village Balapara Dilalpur in Badarganj upazila of Rangpur said he has been cultivating litchi on commercial basis on his orchard for the past 12 years and never incurred any loss.

“I have cultivated Madrazi and China-3 varieties of litchi in my orchard on four acres of land and tender fruits are growing superbly at this fruit setting period amid favourable weather,” he said.

Farmers Ekramul Haque of the same village, Shahidul Haque of nearby village Balapara and Mokhlesur Rahman of village Osmanpur have cultivated Madrazi, Bombay and China-3 varieties of litchi on their orchards on one to three acres of land.

“I am now busy in nursing the growing tender litchi and expecting to get bumper production of the fruit if the climatic condition remains favorable during the next one and a half months,” said Shahidul Haque.

Farmers Abdul Baten and Harish Chandra of village Salaipur in Pairaband union of Mithapukur upazila said they have cultivated China-3 and Madrazi varieties of litchi on their orchards on 1.50 acre of land each this time.

Talking to the agency, Additional Director of the DAE for Rangpur region Agriculturist Khandker Abdul Wahed said litchi farming on orchards has become popular among farmers and highly profitable for them than many other crops.

“A farmer generally earns Taka 1.50 lakh to Taka two lakh on an average per acre of land annually through litchi cultivation on their orchards,” he said.

Senior Coordinator (Agriculture and Environment) of RDRS Bangladesh Agriculturist Mamunur Rashid told the agency that litchi farming is expanding every year bringing fortune to many farmers of Rangpur agriculture region.

An increasing number of farmers are showing keen interest in expanding litchi farming on a commercial basis after getting repeated bumper production with excellent market prices in recent times.

“Farmers are mostly cultivating high yielding, hybrid and local varieties litchi like China-3, ‘Bedana’, Bombay, ‘Muzaffarpuri’, ‘Madrazi’ and ‘Kanthali’ in their orchards in recent years after getting repeated bumper output with lucrative markets prices,” he said.

Expressing satisfaction over smooth fruit formation, Deputy Director of the DAE for Rangpur Agriculturist Dr Md Sarwarul Haque said agriculture officials are extending necessary assistance to farmers to help them in getting a bumper litchi production.