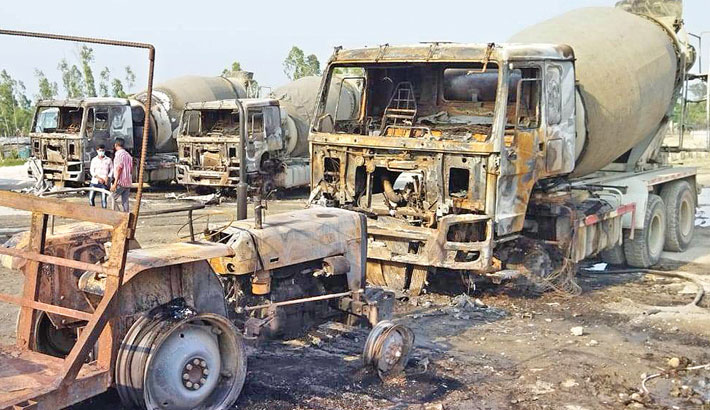 Agitating workers of Gandamara Power Plant in Banskhali upazila of Chattogram set fire to vehicles during a clash with police on Saturday that left at least five people dead. —sun photo

CHATTOGRAM: At least five workers were killed and some 50 others, including cops, were injured in a clash between police and workers of coal-based power plant in Gandamara area of Coastal Banskhali upazila in the district on Saturday.

Sources said the clash occurred at 10:00 pm following a demonstration of the workers of SS Power Plant while they placed four-point demands including decreasing duty hour for Iftar and prayers, half-day duty on Friday for Juma prayer and payment of due salaries.

The tense situation has been prevailing over the issues since Friday evening.

The workers representative sat in a meeting with local administration on Saturday morning to solve the problem.

At one stage, an altercation ensued between police and workers around 11:00am, triggering a chase and counter-chase.

The clash left four persons dead on the spot and many others including three cops injured.

Later, another succumbed to his injury at CMCH and 20 including cops were undergoing treatment there, said ASI Shilabrata Barua of the hospital police outpost.

Miran Rocky, crane operator of the plant, said he lost his brother Rayhan in the clash.

The situation was normal and policemen showed sympathy to them before the clash, he said adding that the situation dramatically changed and police shot them.

Cops were also injured, he said.  The agitating workers carried out vandalism and set fire to some structures and vehicles in the plant, said the DIG.

The DIG and other officials visited the spot after the incident and the situation was brought under control, sources said.

Meanwhile, two separate committees, one from district administration’s part and another from the Police, were formed to investigate the incident. Mentionable, at least four persons were killed and 20 others including cops were injured in a tripartite clash among two groups of villagers and police over setting up of this coal-based power plant on April 4 in 2016. Another was also killed in a clash in 2017.

It is mentionable that S Alam Group took the initiative for setting up the coal-based 1320-megawatt capacity power plant on 600 acres of land at Pashchim Baroghona under Gandamara union of Banshkhali upazila.