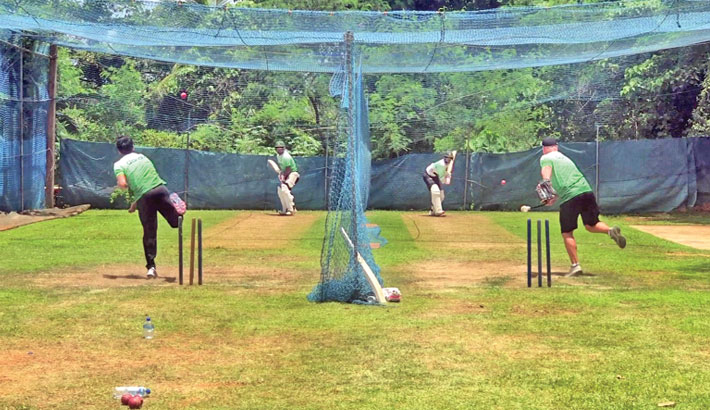 Bangladesh players and coaching staff are seen during a practice session at the CMC in Katunayake on Friday ahead of their two-day intra-squad practice match. —BCB photo

Bangladesh will be looking to finalise their squad for the upcoming two-match Test series against hosts Sri Lanka when they play a two-day intra-squad practice game, which starts today at the CMC, Katunayake.

Bangladesh reached Sri Lanka with a 21-member preliminary squad on Monday and they are expected to cut short the team and make a 16-member squad for the Test series after the intra-squad match.

As per the previous plan, the five cricketers, who will be axed from the squad, will return to Bangladesh but as the government already enforced an air travel ban for both domestic and international flights, a Bangladesh Cricket Board official hinted that they may stay with the team for the whole series.

“The remaining five players can stay with the team if the flight problem doesn’t solve,” said BCB chief selector Minhajul Abedin. Bangladesh earlier on Friday completed a long practice session at the CMC ahead of the preparation match and Minhajul informed that they would announce the final squad after the practice game.

“We have been doing practice from the morning. Today, we did a long practice session,” he said.

“Players offered their Jumma prayer in the field. The players, divided into two teams, will play the practice match. We will name the final squad after the match. We may do it on 18th or 19th,” he added.

Uncapped pacer Mukidul Islam suffered a slight niggle at his ankle during the practice session but the team management believed he can take part in the practice game.

Off-spinner Mehidy Hasan was thrilled to be back in Sri Lanka to play a Test series after four years and he reminisced Bangladesh’s famous Test win in their 100th match on Sri Lankan soil.

“It was a really nice feeling when we won our 100th Test and it was our first Test win against Sri Lanka in Sri Lanka. The team was well committed to performing well and tried heart and soul to win the contest,” he said.

“In the team meeting, everyone was saying about their eagerness to give 100 percent to win the match. When the game started, everyone had the same attitude and despite several ups and downs, we eventually won the match,” he added.

Mehidy also believed that the spinners would have their part to play in such conditions and hoped that the presence of his childhood coach Sohel Islam, who is currently in charge of their spin bowling department, would benefit the spinners.

“I think for spinners, line and length will be important. The wicket in here is very good. I think if not the first one or two days, on the third or fourth day, the wickets will start helping the spinners. I think our spinners take this as an advantage. Both I and Taijul bhai will try to replicate what we did in the past,” he said.

“He has worked with us for the last two to three days here and we do the same at home. We previously didn’t get him in foreign series and this is an opportunity for us to discuss our game with him,” he added.

Bangladesh earlier completed their three-day room quarantine in Negombo quarantine centre and were allowed to take part in the practice session from Thursday after being tested negative on two occasions following their arrival in Sri Lanka.

The first Test will be played from April 21-25 at Pallekele International Cricket Stadium in Kandy while the second game will be held from April 29-May 3 at the same venue.