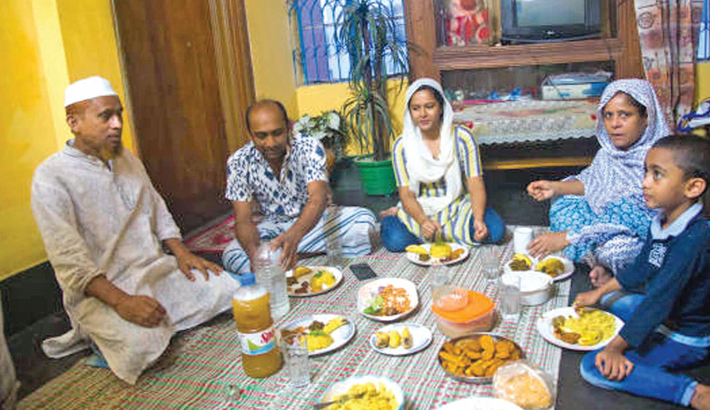 Fasting during the month of Ramadan is one of the founding pillars of Islam. It is an act of obedience and submission to Allah's commands through the highest degree of commitment. It was made obligatory (Fard) during the month of Sha’ban in the second year of Hijrah (Migration) to Medina. Fasting is a commandment and a clear order from Allah upon Muslims.Allah (SWT) says : “O believers! Fasting is prescribed for you as it was prescribed for those before you, that you may become pious.” (Sura Baqara: 183).

Fasting is a worship which protect the fast observant from fire of hell. The great prophet (PBUH) said: “Fasting is a protection and a strong fortress against the Fire.” (Musnad Ahmad). There are many rules and regulations for observing the fast of Ramadan.Some of them are as follows:

Upon whom fasting is obligatory: The Fasting of Ramadan is obligatory upon a person who is a Muslim (who witnesses that none has the right to be worshiped, but Allah Alone and Muhammad-PBUH is His Slave and Messenger), sane(mentally fit),  Balig (must have reached puberty), healthy (who is not sick) and Muqim (resident, is not in a state of travelling). Because, Allah (SWT) says: ‘and whoever is ill or on a journey, the same number (of days which one didn’t observe fasts must be made up) from other days. For women, they must be in a state of purity (clean from menstruation and post childbirth bleeding). Fasting is not obligatory on the menstruating woman or the woman who has her post-childbirth bleeding. A breast-feeding woman or a pregnant woman who is close to delivery, if she fears harm may come to her or her baby from her fasting, the fast is not obligatory upon her.

Taking Suhoor: Suhoor (The pre-dawn meal) is one of the main meals during the blessed month of Ramadan. Allah blesses those who eat Suhoor and Allah’s angels pray for the people who eat Suhoor. Abu Sayeed Khudry (RA) narrated that The Messenger of Allah (PBUH) said: “Suhoor is a blessed meal, so don’t leave it even if you only drink water, as Allah and his angels are praying for the people who eat suhur.” (Musnad Ahmad). Suhoor has a great significance in Islam, but it is not a condition for fasting to be valid, rather it is Mustahabb.  If a Muslim does not eat suhoor, this is not counted as a reason for him not to fast.

Niyyah or intention of Fast: Niyyah means intention; to aim or plan to do something. The Niyyah (intention) of fasting is essential. It’s enough for a Muslim to establish an intention for fasting in his heart to fast for the next day. It is not necessary to say ‘I will fast tomorrow’ rather it is sufficient for him to decide that he will not do anything that invalidates the fast from Subh (dawn) until the time of Magrib (sunset).

Purpose of fasting:  The purpose of fasting is to develop the quality of righteousness (taqwa) by abstaining from sinful deeds. One who fasts, but not try to leave sinful deeds, (s)he is not really fasting. Fasting (Siyam) is not just staying hungry and thirsty, but it (Siyam) is a strong intention of leaving all bad habits, attitudes and behaviours which are forbidden in Islam. Abu Hurayra (RA) narrated that our beloved Prophet (Pbuh) said, “Fasting is not leaving food and drink only, rather fasting is leaving ill-speech and obscenity.” (Baihaki and Mustadrak-e-Hakim). Whoever doesn’t change his/her evil actions, his/her fasting will never be accepted to Allah.  Another narration from Abu Hurairah (RA) that the Prophet (PBUH) said, ‘Whoever does not give up forged speech and evil actions, Allah is not in need of his leaving his food and drink (Allah will not accept his fasting).” (Sahih Bukhari).

Iftar: Iftar is an Islamic term which means to split or to break. The evening meal eaten by Muslims to break their fast after sunset during Ramadan or outside of Ramadan is called Iftar. Iftar is a meal blessed by Allah (SWT). Abu Huraira (RA) narrated that the Prophet (PBUH) said, “Allah said: ‘The fast is for me ... There are two pleasures for a fasting person, one at the time of breaking his/her fast, and the other at the time when (s)he will meet his Lord. And the smell of the mouth of a fasting person is better than the smell of musk to Allah.’” (Sahih Bukhari).

Dua (supplication) of the one fasting at the time of breaking fast is to be accepted by Allah. It is narrated that 'Three men whose dua (supplication) is never rejected (by Allah) are: when a fasting person breaks fast ...’ (Ahmad). It is Sunnah to hasten to break the fast as soon as the sun has set; this brings a more complete reward. Because the Prophet (PBUH) said: “The people will continue to be fine so long as they hasten to break the fast.” (Sahih Bukhaari). Ibn Hajr (RA) said in Fathul Baari: The Christians and Jews used to delay their fast until the stars were apparent, hence, we should contradict them, we should not delay to that extent. It is also Sunnah to break the fast with fresh dates. Anas (RA) said: The Messenger of Allah (PBUH) used to break his fast with fresh dates before praying; if there were no (fresh dates) then with dry dates, and if there were no (dried dates) then he would take a few sips of water. (Abu Dawood). Starting Iftar with Bismillah is also a Sunnah. The Duwa ‘Allaahumma laka sumtu wa ‘ala rizqika aftartu… (O Allah, for You I have fasted and with Your provision I have broken my fast…)’ also can be recited.