People come out of houses on lame excuse 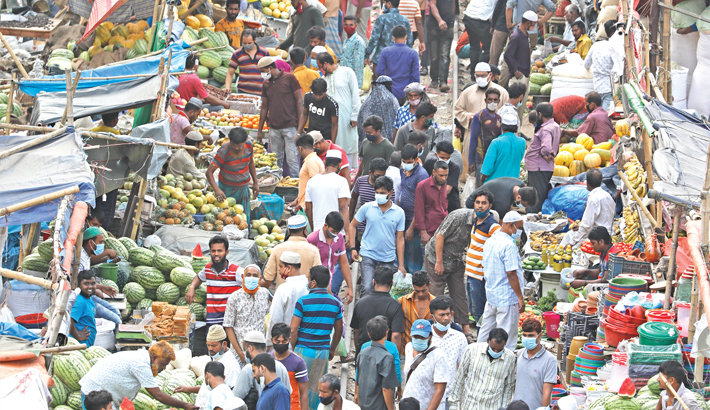 Who cares? : People crowd a market in Jurain rail gate area in the capital on Thursday ignoring health guidelines during the lockdown. - Kamrul Islam Ratan

People in large numbers came out of their houses in the capital and elsewhere in the country on Thursday, not giving a damn about the fresh lockdown enforced to contain the deadly coronavirus.

Despite the spike in corona deaths and infections, many people came out of their houses on various lame excuses. They are even least bothered about maintaining social distancing and wearing of face masks.

People without face masks were seen walking on footpaths and thronging different kitchen markets in the capital and other parts of the country amid the ‘complete’ lockdown.

According to global and national health experts, maintaining social distancing is one of the most important and effective ways to stay safe from the deadly coronavirus or Covid-19.

The capital wore almost a deserted look on Wednesday, the first day of the second phase of the eight-day countrywide lockdown.

But the capital, on the second day of the lockdown, witnessed a huge number of small vehicles such as private cars, micro buses and pick-up vans, plying different streets.

Traffic congestion was also created in some areas of the capital on Thursday due to movement of a large number of such vehicles.

Many police and RAB personnel were seen checking vehicles at different check-posts and city’s entry and exist points, including Gabtali and Jatrabari, on Thursday noon.

They stopped every vehicle at the check posts in different strategic points and asked the passengers about the reason for their movement.             Many areas in the capital witnessed traffic jam as many offices were open on Thursday.

A police sergeant on condition of anonymity said many people came out of their houses on lame excuses.

“We have been instructed by the higher authorities to check every vehicle plying the streets,” he said.

All commuters had valid reasons for going out. Many were going to office while some were going for vaccination, he said, adding that some commuters identified themselves as health workers.

During the lockdown, no inter-district buses left the capital’s Gabtali, Mohakhali and Sayeedabad terminals. stay home through loudspeakers.

"Many rickshaws hit the streets on Thursday. Some rickshaws were seen lying overturned in different city areas, including Khilgaon, Kakrail and Nightingale Restaurant intersections, on Thursday morning.

Movement of all types of vehicles has been banned during the lockdown, said a policeman at the Kakrail intersection in the capital.

Rickshaw pullers have been given punishment for breaking lackdown rules. Their vehicles will be released after some time, the police sergeant said.

Some auto-rickshaws and private cars were also stopped by the police at Kakrail and Bijoynagar areas for breaking rules. None of the drivers has lockdown pass and will be fined, said police personnel.

The government issued a transportation ban and ordered closure of all offices, shopping malls, markets and restaurants to curb the corona infections. The lockdown will continue until Apr 21.