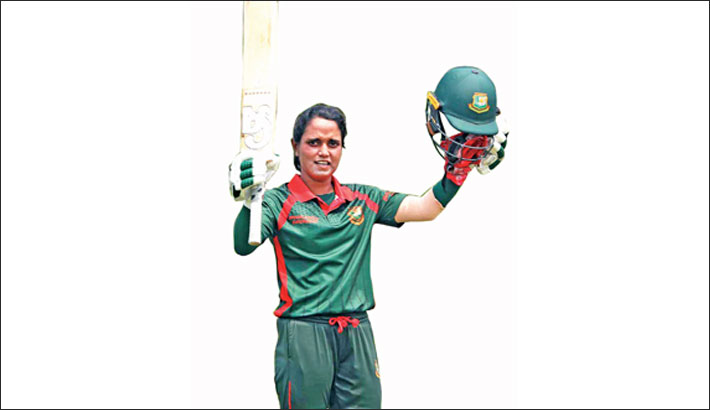 Wicketkeeper-batter Nigar Sultana made her debut for Bangladesh in 2015 and ever since she became one of the leading Bangladeshi run-scorers in the limited-over cricket for Bangladesh national women’s team. Nigar, also known as Joty among the team-mates, recently led Bangladesh Emerging women’s team to seal a comprehensive 4-0 series win over their South African counterpart in a one-day series in Sylhet. The 23-year, who is the first Bangladeshi women’s cricketer to score a T20I hundred during SA Games in Nepal, struck two unbeaten hundreds during the one-sided series and led the girls from the front. Nigar recently has talked to The Daily Sun on various topics including her views on the recently-concluded series, Bangladesh’s receiving Test status, etc.

The Daily Sun: How do you rate your performance in the series against South Africa Emerging women’s team?

Nigar Sultana: It was good, all thanks to the Almighty. We had started the camp in January in Sylhet and followed that in Dhaka and later we played in the Bangladesh Games which helped us a lot. I worked hard on my batting in the training camp and maybe that is the sole reason behind my success.

The Daily Sun: Usually women cricketers are not known for scoring hundred but you have scored two hundred in three games. Do you think of coming out from the psychological barrier?

Nigar Sultana: We played around 10 matches when we had a camp in Sylhet and there I scored a century. I scored 118 runs in one of the games and also scored 87 and 92 runs respectively. Maybe my shot selection played a role in reaching those hundreds. Earlier I was unfortunate but I had belief in myself that someday I will make it. Everyone was pushing me and suggested I’d be able to get a century in no time as I was playing good innings consistently. I was psychologically prepared to have the century and told myself that I only need the right opportunity.

I was out for a low score in the first match but I had the century in the back of my mind in the next match and it became quite easy for me to score the second ton, after scoring the first one. I was psychologically positive about my chances.

The Daily Sun: How do you rate the visitors as some suggest they were very young?

Nigar Sultana: There were five cricketers from South Africa national women’s team. Probably we were better prepared and had the benefit to play in our own backyard. We had talked within us that we are doing good bowling and satisfying fielding but still our batting is costing us the games in the big stages. I think we have brushed aside those worries considering our batting unit has performed nicely. We’ll try to keep this newly-found confidence within us for the next matches.

The Daily Sun: What is your current role in the team? Are you planning to play the anchor role?

Nigar Sultana: It all depends on the wicket and the team management never pushed me by giving any certain role staying at crease. Things like considering I know my responsibilities and I have my own plans about how I want to go with my innings. So I’d look forward to the condition of the match. If it requires me to play slowly then I’d do that and if I need to be aggressive that I would opt to play in that manner.

The Daily Sun: How much has your new head coach Shahnewaz Shahid helped you?

Nigar Sultana: Shanu (Shahnewaz) sir is a wonderful coach and he is solely responsible for my success. When he joined the skill camp in Dhaka he told me that I have problems in two to three areas and if I work out those lacking then I will be able to play big knocks.

He told me to get the singles from playing with the soft hand which I didn’t do previously as I wanted to push the deliveries by force and eventually were deprived of singles as the ball went straight to the hand of the fielders. He worked with the soft-hand pushes, wrist-works, step-outs which I personally like the most and it helped me play big scores. I used to play more lofted shots but now I play risk-free grounded shots.

The Daily Sun: How excited are you about Test status?

Nigar Sultana: I have been very fond of the Test matches and dreamt of representing my country in the red-ball format. We used to play the NCL (National Cricket League) matches but it has been postponed as well. But it was an overwhelming joy when I first heard about the news, which is to me, a dream come true, to be included in the traditional format of cricket. I personally think this announcement will take our cricket to the next level.

The Daily Sun: Do you feel our women cricketers possess the physical strength and the psychological strength to play Tests?

Nigar Sultana: We had never played Tests but if we are ready for the one-dayers then why not for Tests? It all depends on the preparations. As if I am to play Tests then I need to prepare myself up to that level, both physically and psychologically.