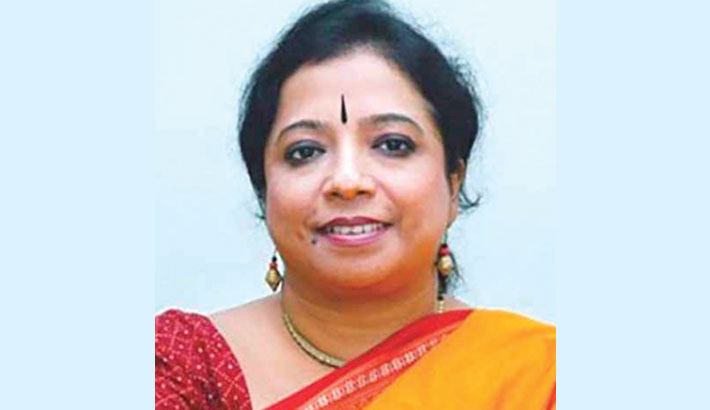 Mita Huq, an eminent Rabindra Sangeet exponent and a recipient of Ekushey Padak, passed away at a hospital in the capital on Sunday. She was 59.

She breathed her last at 6:20am on the day while undergoing treatment at Bangladesh Specialized Hospital.

In separate messages of condolences, they said people will remember with reverence her relentless effort to reach Rabindra practice and Rabindra songs at the

They also prayed for the eternal peace of her departed soul and conveyed the deepest sympathy to her bereaved family.

Earlier on March 31, she was admitted to the hospital after she had tested positive for COVID-19.

When she had tested negative for the virus four days ago, she was taken home.

Later, her conditioned again deteriorated and she was taken to the hospital again on Saturday.

In the last several years, the celebrated singer was battling various kidney-related diseases, and underwent dialysis.

A pall of gloom descended on the cultural fraternity and music-lovers when the news of her demise spread.

The singer was taken to Chhayanaut Sangeet Bidyayatan at 11:00am on Sunday where her colleagues and well wishers paid their last respects to her.

Later, she was buried at the family graveyard in Keraniganj’s Boromonoharia at 2:00pm after her namaz-e-janaza, beside her parents’ grave.

Mita Huq was born in 1962 into a family with rich cultural background. She received her training from maestros such as her uncle late Wahidul Huq, Sanjida Khatun and Ustad Mohammad Hossain Khan. She also studied music at Visva-Bharati University in Santiniketan in India.

She had attended the International Children’s Festival in Berlin in 1974 and, since then, travelled all over the world to perform.

She was enlisted as a performer in the Bangladesh Television and Bangladesh Betar in 1977 and was listed as one of the highest grade artistes till her death.

With her eloquent soothing voice, she enthralled listeners worldwide with her exceptional rendition that won her applause from music lovers of all shades and forms.

With her unique style of presentation, she was equally popular both in Bangladesh and West Bengal.

Mita Huq served as the head of the Department of Rabindra Sangeet at Chhayanaut. She was also the founder director of the music training and performance group Shurotirtha.

She was former General Secretary and current Vice-President of Rabindra Sangeet Shommelon Parishad.

The legendary artiste was awarded the Ekushey Padak, the second highest civilian award in Bangladesh, in 2020 for her contributions to the country’s music.