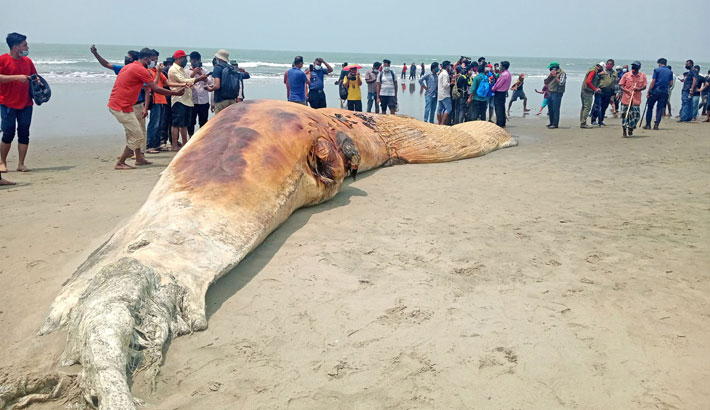 Local people spotted the gigantic marine mammal at around 06:00am on the day. It measured 43 feet in length and 14 feet in width.

They came to see the carcass about 500 metres away from the place where the first whale carcass drifted ashore on Friday.

Mohammad Ashraful Haque, a senior scientific officer and PhD fellow at the Bangladesh Fisheries Research Institute, said the dead animal that drifted ashore on Friday, was an adult Bryde’s whale. Bryde’s whale is a species of the blue whale that inhabits the Bay of Bengal.

“Whales usually move in groups. Whales often die if they leave their pack for any reason. The same thing could have happened to the two whales found on Friday and Saturday, and these whales are thought to have died at least 10/12

Jahirul Islam, executive director of Marine Life Alliance, said it was 43 feet in length and 14 feet in width.

“This species of whale usually swim in pods in the deep sea, especially along the Sundarbans, and may live for up to 90 years. The one that washed ashore today was approximately 50-year-old, and died at least 15 days ago, said Jahirul.

“Samples from the carcass are being collected, from which its cause of death can be determined. The carcass is decomposed,” he added.

Mohammad Amin, additional deputy commissioner (revenue) of Cox's Bazar, said they were preparing to bury the carcass to prevent pollution in the beach.