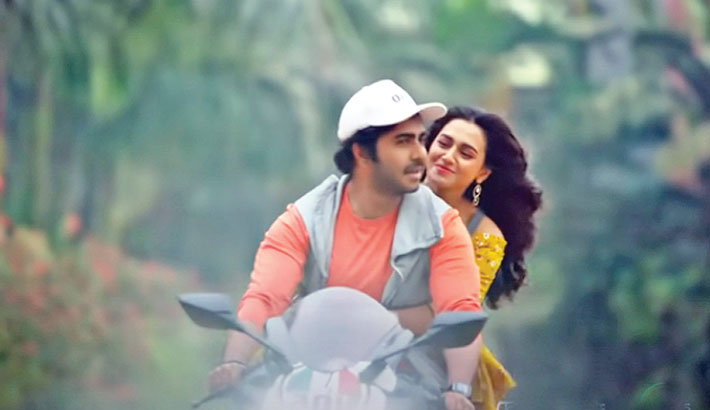 Featuring the lead pair, the romantic song captures some beautiful moments between Abir and Preety played by Ziaul Faruq Apurba and Nusraat Faria respectively. Sung by Ishan Mitra and Nusraat Faria, the song has been written by Shomeswar Oli and composed by Amlaan A Chakraborty.

This is for the first time Nusraat has given vocals for a film song. About the song, the actress said, “I’m thrilled for all the love we’ve received for ‘Jodi Kintu Tobou’. It was a privilege to sing ‘Katey Na Katey Na’ for the movie under the guidance of Amlaan. It is indeed a lovely composition and I hope that our fans like the song as much as they liked the movie.”

‘Jodi Kintu Tobuo’, directed by national award-winning director Shihab Shaheen, is the story of an urban couple Abeer and Preety, who experience a roller coaster of emotions and complex situations to realise their love for each other.

Through the film, Apurba and Faria have paired up for the first time as an on-screen couple. The film also feature notable actors such as Tariq Anam Khan, Saberi Alam, Naziba  Bashar and Amaan Reza.

‘Jodi Kintu Tobuo’ is streaming now on ZEE5 and viewers can watch it free of cost in Bangladesh.