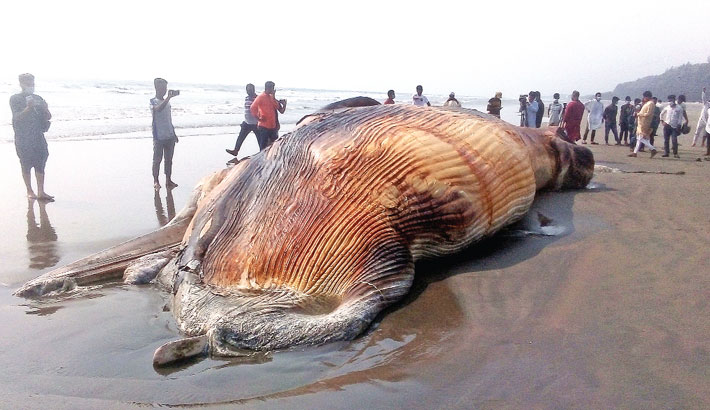 A colossal blue whale, which is around 44 feet in length and 26 feet in width, was found dead on Himchhari beach in Cox's Bazar on Friday.

The gigantic marine mammal, which is assumed to have weighed around 2.5 tonnes, was washed up on the beach that was visible at noon soon after low tide started, said local people. Marin life specialist Jahirul Islam said the whale aged around 16-17 years has died around seven days earlier.

He said the 44-feet long and 26-feet wide whale weighed around 2.5 tonnes. Fisheries department officials and a team from Cox's Bazar district administration visited the spot.

Cox's Bazar District Fisheries Officer SM Khalequzzaman said samples were collected from the carcass of the dead whale which was in a decomposing state.

“It might have died seven days earlier. It will soon be buried with the help of Cox's Bazar district administration. The exact cause of the death will be determined after the autopsy,” he said.

“There are whales of this species in the Bay of Bengal. These particular types of whales are especially noticeable in the southwestern part of the Sundarbans,” said the official. A dead whale similarly was washed up on Himchhari beach for the last time in 2008.