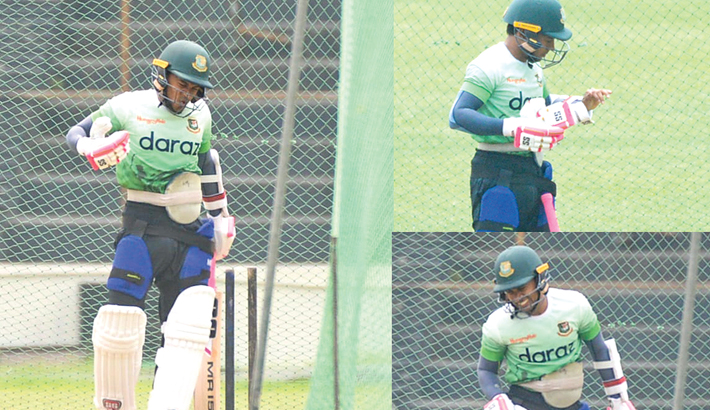 Wicket-keeper batsman Mushfiqur Rahim is seen troubling with finger injury during a training session at the Sher-e-Bangla National Stadium on Thursday. – TANVIN TAMIM

Bangladesh wicketkeeper-batsman Mushfiqur Rahim had a torrid time in the nets as he began his red-ball preparation at the Sher-e-Bangla National Stadium in the capital on Thursday.

Mushfiqur missed the preceding three-match T20I series against New Zealand due to injuries in his shoulder and finger that forced him to warm the bench after the ODI series in New Zealand.

However, the 33-year old, one of the most prolific batsmen of the country, didn’t wait long to start his preparation after recovering from the old injuries for the two-match Test series against Sri Lanka as he opted to have an intense net session.

But it didn’t go well on opening day as he struggled a lot against the throwers who were feeding him deliveries with good pace.

Bangladesh are well aware that the wickets in Kandy will be favourable to pace bowlers and keeping that in mind Mushfiqur planned to have a go against the fast balls in the nets.

But surprisingly, he didn’t look comfortable against the two throwers as balls were hit on his pads and gloves more often than expected and at times he looked to be struggling with pain.

Mushfiqur played some confident drives and cuts but that hardly justifies the fact that he was having a smooth time in the middle.

Mushfiqur is expected to have a clear knowledge of his lacking while going through the videos as his session was recorded from close quarter by a member standing close to the nets.

Though he did not come out of the nets and battled through despite being hit now and then and one thing remained clear that he was not enjoying his stay in the nets.

Mushfiqur also batted against a left-arm spinner and a leg spinner in the academy net to regain some confidence.

A Bangladesh Cricket Board medical unit member confirmed The Daily Sun that the wicketkeeper-batsman had recovered sufficiently from the old injuries that prevented him from taking part in the T20Is against New Zealand recently.

However, it was not known whether he had asked for any medical help after being hit numerous times on several parts of his body during the individual training session at the SBNS.

Apart from Mushfiqur, few other members of the Test squad led by skipper Mominul Haque completed their individual training session at the SBNS on Thursday to prepare them for the two Tests against the islanders.

It was learnt that Mahmudullah and Hasan Mahmud had given their assessment test under the supervision of national team physio Julian Calefeto.

Bangladesh are scheduled to play both Test matches at Pallekele International Cricket Stadium in Kandy.

As part of the preparation, a two-day intra-squad warm-up game is scheduled on April 17-18 at CMC, Katunayake.

The visitors will take on the hosts in the first Test on April 21-25 while the second Test is slated from April 29 to May 3 at the same venue.

BCB officials said that around 30 members will undergo the corona test today and tomorrow ahead of their tour of Sri Lanka before getting inside the bio-bubble.

BCB is planning to form an extended 21-member squad for the tour and after the practice game, it will be shortened to 16-member. A total of five cricketers will return to Bangladesh after the opening Test.