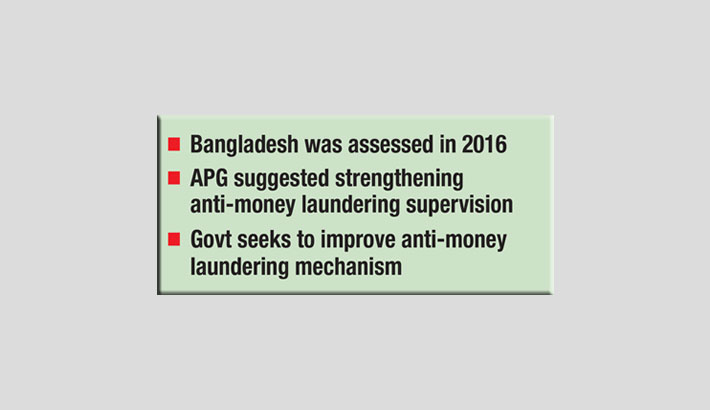 Bangladesh Financial Intelligence Unit (BFIU) will place a report on Bangladesh’s efforts to check money laundering and terror financing in the next annual meeting of the Asia Pacific Group on Money Laundering (APG), scheduled to be held on 30 June this year.

A BFIU official said Bangladesh has made progress in its efforts to prevent money laundering and terror financing, which is important to improve the country’s image in the global arena.

Abu Hena Mohammad Razee Hassan, head of BFIU and also the convener of the Central Task Force for Prevention of Money Laundering and Terrorist Financing, told the Daily Sun that many steps have been taken and a guideline has been prepared for banks and other financial institutions to identify suspicious transactions and prevent those.

Money launderers transfer or try to transfer illicit funds through legal channels in order to conceal their criminal origins, while those who finance terrorism, transfer funds that may be legal or illicit origin in such a way as to conceal their source and ultimate use.

When money is laundered, criminals profit from their actions; they are rewarded by concealing the criminal act that generates the illicit proceeds and by disguising the origins of what appear to be legitimate proceeds. The BFIU guideline empowers banks to prevent such activities, the BFIU chief said.

“If the situation still does not improve, the country is blacklisted. In that case, other countries lose interest in trade and investment with that country,” a BFIU official said.

Such assessment is usually done every three years on a country. Bangladesh was assessed in 2016. In that year, the APG assessed that Bangladesh had not achieved the desired success to stop money laundering abroad and prevent terrorist financing inside the country.

Earlier, in the last meeting in 2019, the APG conference had suggested Bangladesh increase the supervision to prevent money laundering. The 2020 international conference was cancelled due to the global coronavirus pandemic.