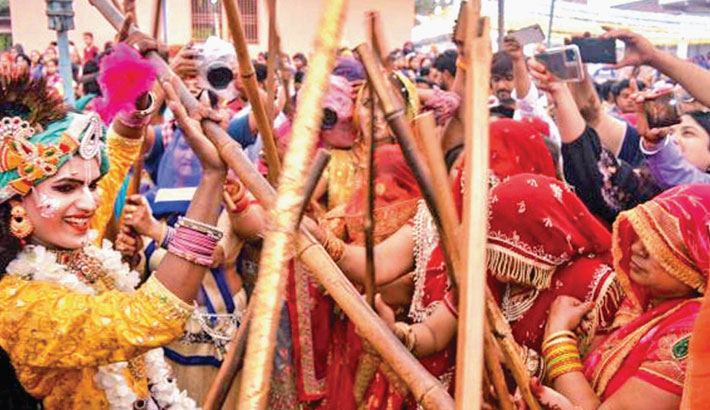 Doljatra is one of the major festivals of Hindu community in Bangladesh and India which is also known as Holi (drawn from Sanskrit word Holika). As colour is the main feature of this festival it is known as festival of colour also. Moreover, as it is observed on the full moon day it is also called Dol Purnima. It is also known as Gaurpurnima because Chaitanya Mahaprabhu was born on this day. The main place of this festival is Brajbhumi (the vast part of Vrindavan and Mathura in Uttar Pradesh, India) but now it is held almost all over India and some places of Bangladesh.

This festival has a historical and mythological origin. Two episodes mainly revolve round it. One is the story of Prahlad and Holika. According to Bhagawat Puran, Hiranyakashipu, a mythical king, once demanded that from now on he should be worshipped as a god. He claimed to be the lord of the universe but his son Prahlad protested and declined to accept anyone other than Lord Vishnu as God. The king tried in different ways to get his son to bow down before him but failed and being furious ordered his army to kill Prahlad but they also failed. Frustrated king hired his sister Holika to throw Prahlad into the fire of heavan. Holika vowed to kill the prince. Prahlad received a gift from God that he would never be burnt. Holika grabbed Prahlad and jumped into the fire. Prahlad called Vishnu again and Vishnu saved him but Holika was burnt into ashes. The story of Holika’s burning is associated with Holikadahan (burning of Holika) or Chanchar festival held on the eve of Doljatra.

The story of Radha-Krishna is more or less known to all. One day, Sri Krishna was playing with Radha and her friends in Vrindavan. Suddenly, Radha faced an embarrassing situation. Instantly Krishna started playing Abir (perfumed red powder) with Sri Radha and her girlfriends to cover Radha’s shame and painted them all with Abir. It is said that the Hindu community celebrate Holi festival remembering the Abir game played by Sri Krishna with Sriradha and her maids.

It is also said that if the body is unclean before the beginning of the year, the messenger cannot touch anyone. That is why, the body is painted by celebrating Holi. Many people also believe that Holi has been introduced because of its unity with the diverse colours of nature. During Doljatra, different liquid colours are sprinkled on one another from distance. Sometimes, people come closer and brush colours on others with hands on face and paint the liquid. Sprinkling colour is a mjor part of joy of this festival. Humourous songs are also performed in different places. At the morning of Dolajatra, idols of Radha and Krishna are bathed in abir and gulale, placed on Dola (a rocking cradle) and placing the Dola in front procession is held with kirtan (a particular type of song based on the love affair between Krishna and Radha). This is also another reason that this festival is called Doljatra.

Doljatra has a secular aspect also. Since morning, men and women get intoxicated with different types of colours, mainly with abir and gulal. As the time is spring, in some places, particularly in Shantiniketan, it is called Basantotsav (spring festival). Observation of this traditional festival through special dance and songs in Santiniketan has been continuing since the time of Rabindranath. On the day before the swing, a special festival is organised by burning straw, wood, bamboo etc. which is known as Holikadahan. In northern India and in many parts of the world, the festival is known as Lord Krishna’s Dolajatra but in West Bengal, Madras, Orissa and Bngladesh it is known simply as Doljatra. In western and central India and Nepal, it is known as Holi. In Bihar, it is called Phagwa or Fagun (abridged form of Falgun) Purnima originating from fag i.e. abir.

This festival is held on the full moon day in late Falgun or early Chaitra. The day is fixed but as Bengali almanac is followed the date is changed every year. Let us have a look at the dates in last few years: -

Like other festivals of Hindu community, Doljatra is also a festival of pleasure and colour is its most essential concomitant. Shaking off all pales from life this is the day to be colourful because colour covers all types of feelings of human beings. There are many beautiful songs in Bengali, Hindi and other Indian languages on this festival in and outside movies. It is observed in different ways in different places, but in Northern India this festival is celebrated in a unique manner.

Barsana, at present in Uttar Pradesh, India is known as the birthplace of Sri Radhika. Here this festival is further known as Lathmar Holi i.e. Holi with kicking. Following ancient tradition, till today, on the day of Holi, youngsters come from Nandagaon (the village of Lord Krishna) to play with colour. But the girls of Radhika village take revenge because they can’t forget that Krishna left Radhika forever. In retaliation for that insult and injustice the girls of Barsana beat, slap, kick and punch the youths of Nandagaon, but according to convention the youngsters do not prevent girls of Barsana from beating them. In fact, they enjoy it. Everything is based on fun and pleasure, but sometimes situation surpasses the range of mockery and an unpleasant environment arises. Under the camouflage of fun, some people try to avail of immoral advantage.

However, the situation becomes congenial and the next day is the turn of boys of Barsana. They flock to Nandagaon, but this time no question of counter revenge appears, no slapping or kicking occurs. Rather, the girls of Nandagaon greet them with Kesudo made from the colour of palash flowers. Finally, everything ends merrily and colourfully with sweetness and fragrance of palash.