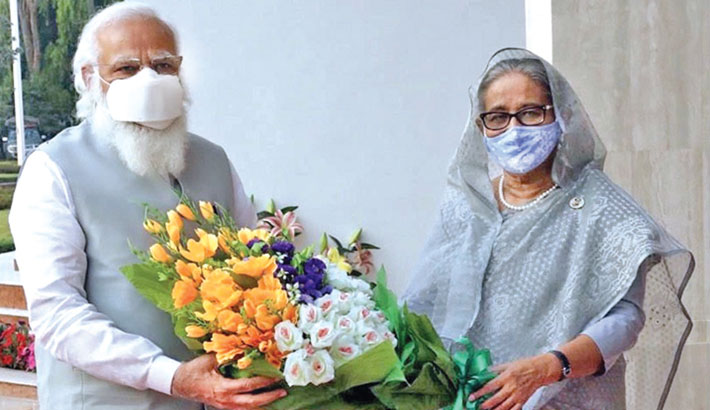 Indian Prime Minister Narendra Modi on Saturday offered prayers at Jeshoreshwari Kali temple in Bangladesh. While offering prayers, he sat on the floor and the priest recited the religious texts. He also went round the temple. Occurrence of such an incident in Bangladesh is undoubtedly a historic event. Besides visiting the Matua community temple, he also spent some time at the birthplace of the founder of the community. As there had been security-related problems, the Government of Bangladesh helped overcome the difficulties. The administration took extra security measures for Modi’s visit in the wake of protests by a handful of leftists and Islamist groups. This event is undoubtedly an historic one. When the incident has been going on in Bangladesh, the West Bengal Vidhan Sabha Election - 2021 is in progress.

West Bengal is at the height of polls excitement. The first day of polling was marked by stray incidents of political violence. On the other hand, as a journalist, I was observing as to how people were casting their votes from Tejpur to Guwahati. While staying in Assam, I followed through TV screen the ongoing programmes of the Prime Minister’s visit to Bangladesh marking Mujib Borsho and Golden Jubilee of the country’s independence. Majority of people belonging to Matua community live in Bongaon located on the Indo-Bangladesh border. They are vocal enough centring the state election. BJP lawmaker Shantonu Thakur, the representative of Matua community, termed the Prime Minister’s tour as an historic event.

Assam and West Bengal are two separate states of India while Bangladesh is a sovereign state. Still the threads of politics have closely bonded them. The citizenship bill is a major programme of the BJP. The central Minister of Home Affairs, Amit Shah, declared about placement of the bill in parliament.  BJP is determined to implement the bill. The citizenship bill could have been a strong weapon during West Bengal polls. In its election manifesto, it has been incorporated that if BJP comes to power then in the very first cabinet meeting it would implement the citizenship bill.

However, there remains a debate over the year of its implementation and the procedures that need to be followed. But, BJP wants an end to the debates. It was also a demand of the Matua community for implementation of the citizenship bill.

Although it was one of the points of the polls manifesto, different scenarios could be observed in Assam and West Bengal. On arrival in Assam, I found lots of posters and banners in bazaars and shops protesting the bill. Once implemented, it would be a concern for the minority Muslim community, but it also remains a matter of concern for the Hindu community. Ahamias (people of Assam) are a mixed community. They not only consist of Bengalees, a large number of indigenous people also work in tea gardens here. There are also people of Nepalese origin who have come here much earlier. They are living here for generations together. Even many of them never visited Nepal. So, they love to identify themselves as Ahamias. Agarwals of the Marowari community have played an important role here from a distant past.

Because of this reason, who are local residents? Who are Indian citizens? Who are Bangladeshi citizens? Centring the issue, there are problems, especially in border areas. Reacting in a similar manner, the people of Bangladesh as well those of Assam have opposed the citizenship bill. Indian PM Narendra Modi is trying to move forward Indian ties with Bangladesh. Incidentally, this is Mujib Borsho. At the same time, this is the Golden Jubilee of Bangladesh independence which has symbolic importance. But, at the moment, China and Pakistan are trying to play foul with India. The geo-strategic position of Bangladesh is important to India. Narendra Modi is justifiably moving forward the Indo-Bangladesh relations at diplomatic level. I always think that efforts had been made to establish a relationship between Congress and Awami League. During Bangladesh Liberation War in 1971, there had been an intention to intertwine the ties with the same thread. Modi wants to look at it in a broader perspective. A land boundary deal has been signed. Then in recent times, an important bridge had been built connecting Tripura of India with Bangladesh thereby cementing ties between the two countries. It is indeed a rare event. As a result, export-import is being expanded. There have been talks for pursuing bilateral trades through road transport.

In this manner, every country of the South Asian region can move forward towards advancement by holding each other’s hands. Of course, there is opposition in both the countries. As for instance, BJP’s citizenship bill has influenced the domestic politics in Assam. On the other side, inside Bangladesh too, pro-Jamaat factions chanted ‘Go Back’ slogans during the Indian Premier’s visit to the country. They have pasted posters. Even, a few stray incidents happened during this period. This is not a separate or minor incident. In both the countries, an opposition force remains active. Modi visited the Kali temple of Matua community in Bangladesh at a time when West Bengal elections got underway. It had been discussed widely that Modi did it eying the state polls. Even, offering Kali Puja on the polls day bore significance. The Government of India will remain immensely grateful to Bangladesh for arranging the programmes. The manner Sheikh Hasina helped prepare the tour schedule of Narendra Modi, it may be hoped that the path of Indo-Bangladesh amity would be smoother and wider. Today, our mutual cooperation and close relationship have been strengthened to such an extent that it has become a beacon of new hope.