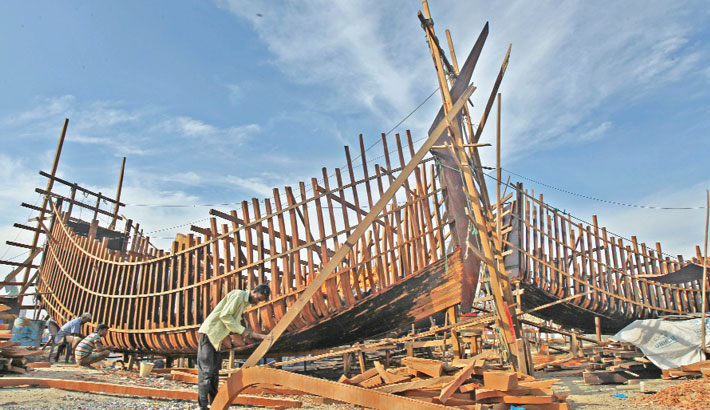 A fishing trawler is being made on the bank of the river Karnaphuli in Chattogram city. The photo was taken from Karnaphuli Bridge area on Sunday.

CHATTOGRAM: Despite the availability of modern and metal fishing boats, the demand for wooden boats built manually by self-taught builders is still high in the country.

The supply of sea fishes also depends on the boats sailing in the Bay of Bengal from coastal banks of districts including Chattogram, Cox’s Bazar, Barishal and Bhola.

Support from the government, workers-friendly environment and training will help take the industry forward further, observed the market insiders.

The history of manufacturing the non-mechanised boat in this region dates back to 2,500 years while the use of the engine boats started in the last century.

Wooden shipbuilding activities started in the Bengal centring Chattogram and Sandwip in the ancient era and reached the top position in the medieval age of 1400 to 1500.

The Bengal used to export wooden ships to Europe, Africa, Turkey, Egypt and many countries of the globe. Even the Ottoman Empire and the British Royal Navy were the elite customers who bought war vessels from the then Chittagong.

Such an antique ship is still kept at a museum in Germany, said sources concerned.

Since the industrial revolutions, steel started replacing wooden ship and the wooden shipbuilding industry lost its market failing to cope with the modern technologies in the Western world.

Though the industry didn’t disappear from this region, it has been transformed to build fishing boats, sampan and other small-sized water-crafts.

Sources said that activities of fishing as well as boat building marked a rise after Bangladesh won vast areas of the maritime boundary in 2012.

But, there is no organized yard to facilitate wooden boat building.

In Chattogram, wooden boat building activities are seen on the North bank of Karnaphuli river, Kalurghat and Charpathorghata areas.

Sources said around 60 to 70 fishing boats are built in season between November and May on the north bank.

Several hundred workers are involved in three departments including carpentry and wielding of the boat building industry. It takes some three to four months for six to 10 workers to build a boat.

Each boat costs Tk 70 lakh to 80 lakh while the total cost exceeds Tk 1 crore for preparing the boat for fishing in the deep sea, said the sources.

However, the local wooden boat builders have to import engines from China at a cost of Tk 10 lakh to 12 lakh based on capacity.

Apart from the local woods, they also import the item from Thailand, Malaysia, Nigeria and Myanmar.

The boats can sail for one to two weeks carrying 22 to 25 fishermen and return with 40 to 50 mounds of fishes.

According to sources in the Marine Fisheries Department, there are around 6,100 fishing boats with updated license while the total number would be around 20,000 to 22,000.

Around 80 per cent of the fishing boats are built and registered from Chattogram, they said.

While visiting some boat building yards on the Karnaphuli bank, this correspondent found that the workers were working without any safety gears and in an unhygienic environment.

Md Abbas, who has been working in the industry for the last three decades, observed that demand for wooden boats is still high among the fish traders.

“We are building two boats for the upcoming season. The boats will cost around Tk 1.6 crore,” he said while talking to this correspondent in the Chaktai area.

He also highlighted different problems facing the industry--- lack of suitable place for the industry, the safety of workers and compensation in case of any accidents.

Carpenter Abul Kalam said they are working under a contactor and gets Tk 900 to Tk 1,000 per day. An assistant of them is also paid Tk 700 per day.

Kalam said they have to depend on the kindness of the owners for financial help after the injury of any worker as there is no association or rules for the industry.

He also alleged that though they attempted to form a labour association, the owners prevented them.

The carpenter demanded the government’s support for building a yard and ensuring the safety of workers and compensation as per rules of other industries.

Aminul Hoque Babul Sarkar, General Secretary of Samudrik Motsya Ahoronkari Boat Malik Samiti of Chattogram, said both the fishing activities and quantity of fishes have been increased compared to the previous seasons.

“We need two to three seasons to gain profit after investing in a fishing boat. Some boat owners cannot do it even after 10 seasons for insufficient fishing and trades,” he said.

“A good number of fishermen still depend on sky, star and moon for the direction and weather condition during sailing while some uses GPS systems,” he informed.

The boat owners will have to adopt modern-technologies for their boats keeping the same shape and design to make them more capable of ensuring safety, he suggested.