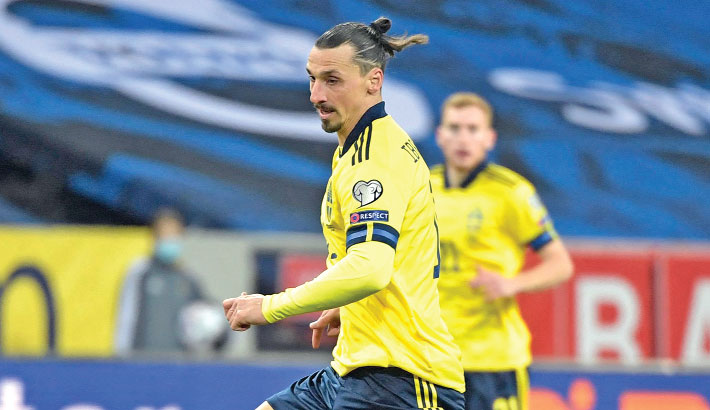 Zlatan Ibrahimovic made a winning return to international football with Sweden on Thursday after nearly five years in their opening qualifier for the 2022 World Cup in Qatar.

Ibrahimovic set up Viktor Claesson’s 35th-minute winner in the 1-0 win over Georgia at the Friends Arena just outside Stockholm in his 117th appearance for his national team, his first since Euro 2016.

"It felt good. It felt like it was my first international match. It was a lot of adrenaline," Ibrahimovic told Sverige Radio.

Sweden lead their group two points ahead of Greece and Spain, who played out a surprising 1-1 draw in Granada. "I don’t like the result and we weren’t inspired either... Whenever we got near the Greek penalty area we lacked sharpness and efficacy," said Spain coach Luis Enrique.

First-half goals from Domenico Berardi and Ciro Immobile were enough for Italy to ease past the Northern Ireland 2-0 in their first World Cup match since their humiliating failure to qualify for the 2018 tournament in Russia. They sit second in Group C, level on points with Switzerland who beat Bulgaria 3-1.

Robert Lewandowski struck with seven minutes remaining in Budapest to earn Poland a late point in a thrilling 3-3 draw with Hungary.

John McGinn’s stunning overhead kick five minutes from time rescued Scotland from a losing start to their campaign in an entertaining 2-2 draw with Austria.