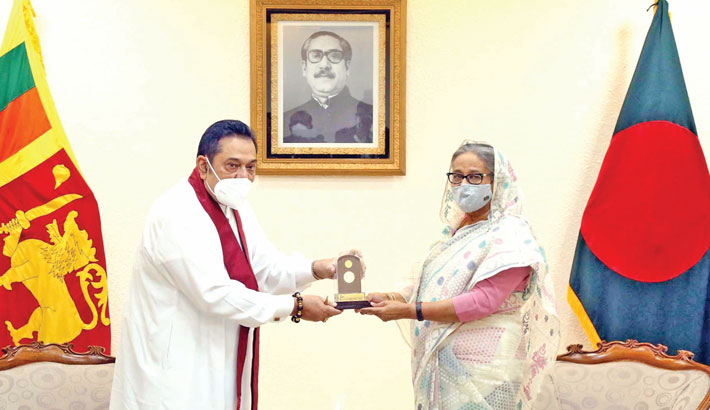 Bangladesh and Sri Lanka have agreed to deepen their cooperation in a wide range of areas, especially exploration of newer avenues in trade and commerce, as there are still many untapped bilateral opportunities that can further boost trade growth.

The two countries reached the agreement at the official bilateral talks held at the Prime Minister’s Office (PMO) in Dhaka on Saturday.

Summit leaders at the talks observed that despite having exceptional level of ties, the bilateral trade between Bangladesh and Sri Lanka is far less than its potential.

They called for aggressive initiatives to expand trade and commerce and improve cooperation in areas such as agriculture, health, vocational education and youth development.

Diplomatic sources said Bangladesh and Sri Lanka have a meager bilateral trade and this is too tilting in favour of the Island nation. The bilateral trade has shown strong growth trend, amounting to $142 million in 2016.

According to highly-placed sources, the two sides discussed the entire range of bilateral, regional and international issues of common concern.

Prime Minister Sheikh Hasina told the meeting that the bilateral trade is far less than its potentials and mentioned a joint feasibility study on striking a Free Trade Agreement (FTA) has already been completed.

She stressed for an early conclusion of the FTA to fully explore the opportunities for expansion of trade and commerce between the two countries.

The Bangladesh premier said her country has a substantial number of products which have high prospects in the Sri Lankan market.

In this context, the Prime Minister said Bangladesh would like to obtain technical knowhow from Sri Lanka in coastal, aquaculture, marine culture, and deep sea fishing.

In the education sector, Sheikh Hasina said both the countries should have more institutionalised cooperation in capacity building, vocational training, and skill development.

She laid importance on core training of Bangladeshi nurses and other health professionals in Sri Lanka.

Both the sides should also take immediate action for due implementation and follow up on all bilateral instruments signed so far, the Prime Minister said, adding that Bangladesh values its relationship with Sri Lanka. She mentioned that the 50th anniversary of the establishment of diplomatic ties with Sri Lanka will be held next year.

Rajapaksa highly praised Bangladesh's digital transformation and its performance and said they would be happy to share Bangladesh experiences in agriculture, health and education issues for mutual benefits.

Laying emphasis on increased trade and its diversification, the Sri Lankan premier sought more attention to tariff preference and said his country will invest more in the private sector business areas.

He also sought measures to make easier the repatriation of profits and praised the concept of blue economy of Bangladesh and said Sri Lanka is ready to share its experiences in this regard.

The Sri Lankan leader said his country is also keen to learn from Bangladesh about disaster management and appreciated Bangladesh and Prime Minister Sheikh Hasina for handling the Covid-19 situation successfully.

Meanwhile, Foreign Minister AK Abdul Momen told a press briefing that Dhaka and Colombo have agreed to sign Preferential Trade Agreement (PTA) as an interim arrangement as it need much time to complete negotiation for Free Trade Agreement (FTA).

He said the PTA will allow a duty-free access to a number of goods between the two countries which will boost bilateral trade.

The two countries have completed preparations for signing of FTA in 2017, but the Foreign Minister said they want to go slow over FTA signing. “Prior to FTA we can proceed for PTA to give priority to some selective items.”

Momen said during the bilateral meeting, Prime Minister Sheikh Hasina gave special focus on connectivity and its benefits for all the countries in the region.

Sri Lanka has agreed to sign the coastal shipping deal initially through private sector, he said, adding that Bangladesh has agreed on it.