Khas Land: An issue of concern 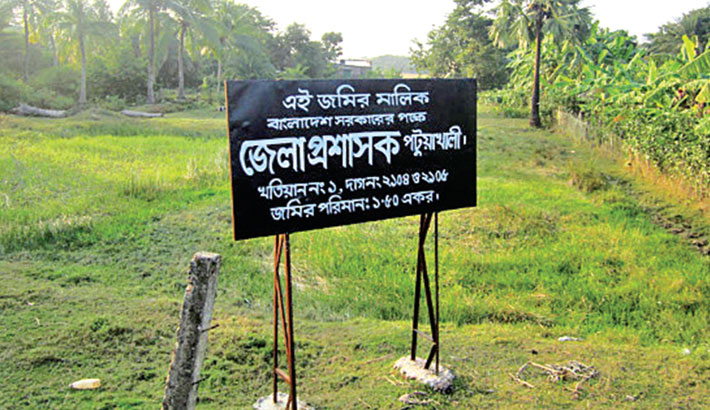 Land is a major source of rural livelihood and symbol of social status. It provides food security and forms the basis of our social and economic power structures. Khas land is an important source of livelihood for extremely poor people. The term "khas" originates from a Persian word. Khas means government owned land. Khas land refers to those land under direct control and management of the government. Khas land has been defined in section 2(15) of the State Acquisition and Tenancy Act, 1950. According to the Act "khas land" or land "in khas possession" in relation to any person includes any land let out together with any building standing there on and necessary adjuncts thereto, otherwise than in perpetuity. Khas land is managed by the Ministry of Land. It gets recorded in the Khatiyan no.1 in the name of the collector.

Khas land may be a best tool for reducing poverty by proper distribution. According to the latest data of the Bangladesh Bureau of Statistics, the poverty rate of Bangladesh is 21.8 per cent and 11.3 per cent people are still extremely poor. If the landless poor people get access to khas land, they will feel fortunate in having most resourceful wealth and concentrate on its best utilization. Proper distribution of khas land will provide food security to poor people. Food security will help the country to improve law and order situation and practice good governance.

But there are many impediments in the field of proper distribution of khas land. Such as, the complex application form requires submission of many documents which are difficult to obtain, landless have to pay extra money to obtain documents, long time needed for the verification process, corruption, favouritism, lack of transparency, powerful illegal occupants, etc. To overcome these problems, proper measures should be taken. Such as: proper identification, easy and simple khas land distribution application form, appointment of well trained person for identification and distribution of khas land, updating khas land maps. Watchdog mechanism needs to be developed to follow up the post distribution system. There are many non-governmental organisations working on khas land distribution. It may be very useful if the government collaborates with these organisations.

Bangladesh is a densely populated country. So, it is important to establish a well-structured khas land management system for proper governance of land and to eradicate poverty as well as development of the economy. Not only the government, it is also the responsibility of all walks of people to remove corruption and illegal land grabbing. We have to raise the people’s awareness, accountability, transparency and the attitude of suppressing injustices taking place around us.