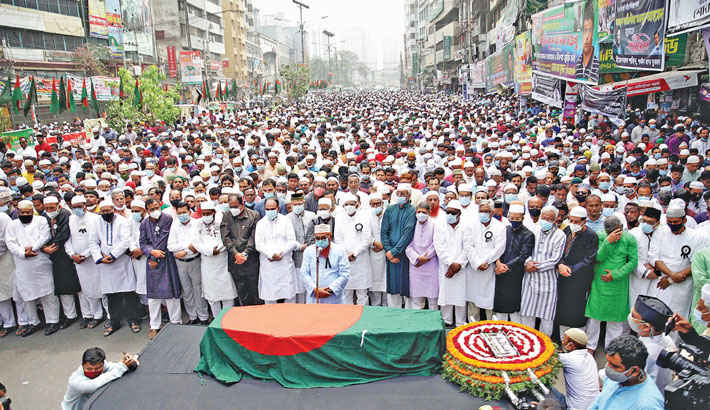 BNP Standing Committee member Barrister Moudud Ahmed was laid to eternal rest at his family graveyard in Noakhali on Friday.

He was buried beside the graves of his parents in Companiganj’s Manikpur of the district in the afternoon.

A pall of gloom descended on the people when a helicopter carrying the body of the veteran politician reached Noakhali at 3:10pm.

His namaz-e-janazas were held at Kabirhat Degree College, Bashurhat Government Mujib College and his village home premises in Manikpur.

Earlier, on the day, his body was taken to the Central Shaheed Minar at around 9:00am where thousands of people, including political leaders and activists of different parties, paid homage to him.

Then, the body of former Law Minister Moudud Ahmed was taken to the Supreme Court premises where his first namaz-e-janaza was held around 10:00am.

The second namaz-e-janaza of Moudud member was held at in front of BNP’s Naya Paltan central office after party leaders and activists paid homage to the deceased.

BNP kept the party flag flown at half-mast and hoisted black flag on Thursday marking the death of the senior party leader.