Resistance against army in Joydebpur 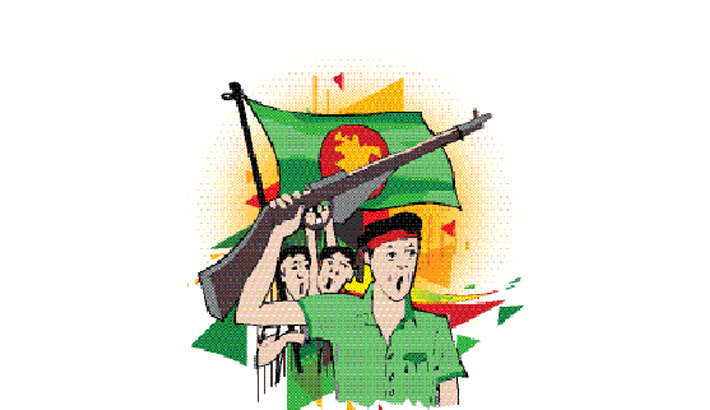 The Liberation War had not begun but the freedom-loving Bangalees proved on March 19, 1971 that they would do anything to liberate their motherland.

On the 18th day of the non-cooperation movement, all schools, government, semi-government and private offices and institutions remained closed in East Pakistan.

Bangabandhu Sheikh Mujibur Rahman and Pakistan President Yahya Khan had sat for talks. It was decided that Mujib-Yahya meeting would take place on the following day with the advisors of both the parties.

But 90 minutes after the heated discussion, Bangabandhu came to know that the military had fired on the mass people at Tongi, Joydebpur and other places.

Then he found no reason to continue the dialogue and condemned the attack.

In Joydebpur, clashes broke out between the agitated people and Pakistani army men.

At least two civilians died and over 200 others, including three army men, injured, which made the authorities to impose a curfew in the area.

Back then the mass people often put barricade on roads to prevent normal movements of Pakistan army officials in East Pakistan.

The conflict was triggered when locals blocked the road and prevented a military commander, who earlier went to Joydebpur, from returning to Dhaka. The army men also brutally fired on the mass people in Rangpur and Saidpur on the same day.

The news of the attacks made the people in Dhaka furious. They immediately brought out spontaneous processions in the city.

Bangabandhu Sheikh Mujibur Rahman gave a fast response to the army atrocities and said if the junta thought it could suppress a popular movement by military action, they were living in a fool’s paradise.

Condemning the killings, Bangabandhu said, “No sacrifice would be considered enough to emancipate the people of Bangladesh. They can’t be suppressed by force. If necessary, we shall give the last drop of our blood to see that our posterity lives happily as free citizens in a free country.”

The meeting between Yahya and Bangabandhu had resumed after a break, but it was clear that the discussion was failing to bring a fruitful outcome.

People were certain that a war was coming towards them and the only thing they were looking for was to take preparations for resistance to bring the results in their favour.