Bangabandhu to remain as a source of inspiration: Solih 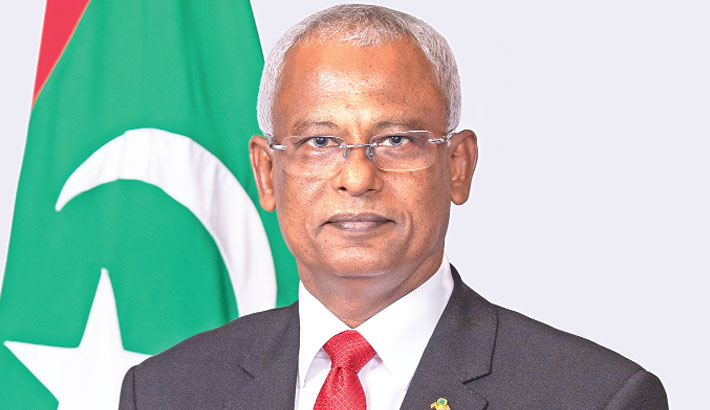 Maldives President Ibrahim Mohamed Solih has said that Bangladesh’s founding father Sheikh Mujibur Rahman was a symbol of democracy and freedom, whose efforts were instrumental in securing an independent destiny for Bangladesh's people and will remain a source of inspiration for many generations to come.

“Throughout his life he was an uncompromising advocate of democracy and political freedoms. He championed those values often, in powerful words that resonated with people from all walks of life. His six-point programme laid the foundation for Bangladesh’s independence, and provided the underlying values of the country’s constitution,” he said.

“As testament to his skill and his monumental historic standing, his March 7 speech effectively declaring the independence of Bangladesh has been added by the UNESCO to the Memory of the World Register as documentary heritage.”

The President was speaking as the guest of honour at the official ceremony held at the National Parade Ground in Dhaka to commemorate the birth centenary of Bangabandhu Sheikh Mujibur Rahman and the golden jubilee celebration of independence of Bangladesh.

Speaking at the ceremony, he emphasised that throughout his life, Sheikh Mujibur Rahman was a firm advocate of democracy and political liberty and that he advocated those ideals that resonated with people from all walks of life.

Despite the tragic circumstances of his death, President Solih noted that Sheikh Mujibur Rahman will always have an honoured place in the hearts of those who yearn for democracy and freedom.

The President also shed light on Bangladesh's extraordinary work in uplifting the lives of its people and developing their nation.

“I congratulate Bangladesh for the remarkable work that has gone into uplifting the lives of its people and developing the country. The pace of economic development in Bangladesh has been remarkable,” he said.

The Maldives President highlighted the prudent policies adhered to by Bangladesh's leadership and the hard work of its people are transforming the country into a fast-growing and strong economy.

“We are immeasurably grateful for the grant assistance of food, personal protective equipment and medical supplies. Recently the Bangladeshi government has made the extremely generous decision to send a team of healthcare professionals to help build up the Maldives’ health response.”

This is in addition to the medical team that visited the Maldives last year, he said, adding that the Maldives is extremely grateful for this decision, and acknowledges it as symbolic of the strong relations between our two countries.

“As low-lying countries in the Indian Ocean, climate change is also an urgent mutual priority for both the Maldives and Bangladesh. Every monsoon season Bangladesh suffers much loss of life because of the flooding caused by heavy rainfall. This is a tragic reminder of the consequences of climate change,” he said.

In this context, he said the Maldives commends Bangladesh for the leading role it plays in the Climate Vulnerable Forum and for its efforts to develop a Blue Economy - a goal that we share in common. “We will continue to work together with the government of Bangladesh to address the existential threats posed by climate change.”

President Solih further extended an invitation to Bangladesh President Md Abdul Hamid and Prime Minister Sheikh Hasina to pay a visit to the Maldives at an opportune time.