Coordinated efforts must to address waterlogging in Chaktai-Khatunganj 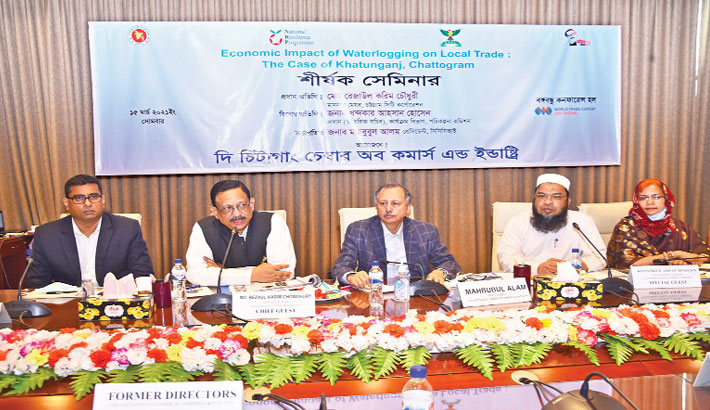 CCC Mayor Md Rezaul Karim Chowdhury is seen addressing at a seminar on ‘Study on Economic Impact of Waterlogging on Local Trade: The Case of Khatunganj.’

CHATTOGRAM: Chattogram City Corporation (CCC) Mayor Md Rezaul Karim Chowdhury emphasised the need for coordinated efforts by the all concerned agencies to address the waterlogging crisis at the business hub of Chaktai-Khatunganj and the city as well.

The mayor made the remark while addressing as the chief guest at a seminar on ‘Study on Economic Impact of Waterlogging on Local Trade: The Case of Khatunganj.’

Chattogram Chamber of Commerce and Industry (CCCI) and National Resilience Programme of Programming Division under the Planning Commission jointly carried out the study in cooperation with the UNDP for identifying the cause and economic impact of the waterlogging and its prevention method.

The Mayor Rezaul in his speech attached importance on recovering the occupied canals, an end to use of polythene, prevention of dumping of garbage in the drains and canals, and regular monitoring of the Karnaphuli dredging to get rid of the crisis.

He also announced to develop a logo to introduce the unique features of Chattogram city across the globe.

Rezaul said community halls, dormitories for truck drivers and truck terminals can be constructed in the Khatunganj, Korbaniganj and Chaktai areas.

It would be possible to address the waterlogging crisis permanently after developing the areas as planned special zone, the mayor observed.

CCCI President Mahbubul Alam said the Khatunganj, Korbaniganj and Chaktai areas have a glorious history of conducting trade through waterways.

The areas started witnessing the waterlogging due to a surge in tidal water and excessive rainfall since the devastating cyclone in 1991, said the business leader.

Filling of canals and drains in the areas also caused the traders to incur loss of crores of money following inundation of warehouses and other business establishments, he said.

The chamber president hoped that project will be taken to address the crisis following the final report of the study.