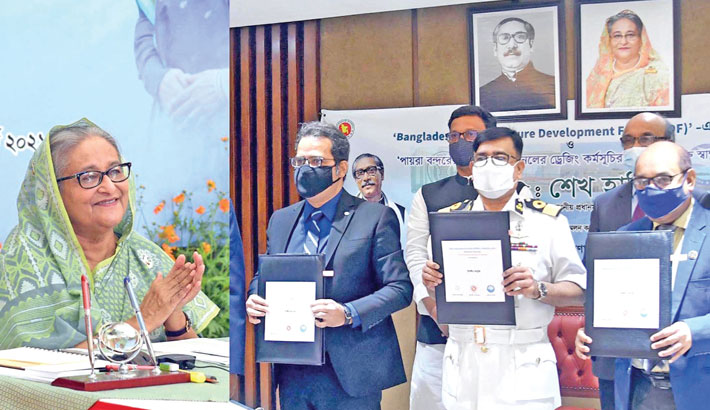 Prime Minister Sheikh Hasina virtually joins the signing ceremony of a tripartite agreement between the Finance Division, Paira Port Authority and Sonali Bank from her official residence Ganabhaban on Monday.

The BIDF that formed taking funds from the foreign exchange reserves began its journey through financing to the capital and maintenance dredging in Ramnabad Channel of the Paira Port, reports BSS.

BIDF is the first such its kind in South Asia as well as in the world which would finance the development activities.

Speaking on the occasion, she said as a developing nation now Bangladesh has to move on with its own feet and run develop works with its own financing towards becoming a developed country.

Mentioning that during this Covid-19 situation the country’s foreign currency reserve was increased alongside reduction of other costs, Sheikh Hasina said the government has thought about the potential use of this foreign currency to move out from loan dependency rather make instances of own financing or loan.

“This endeavor will be for an effective investment of surplus foreign currency reserve,”

she said, adding “It will not only be beneficial for the country but also help us to grow our own confidence and self-esteem, and we will be able to show the world that we can do it.”

The premier said investors now could borrow from the BIDF and use it in the country’s development initiatives.

Regarding the financing to the Paira Port, she said deep sea port could be established in future centering this port. The Prime Minister expressed her gratitude to the authorities concerned to materialize her concept of using the surplus foreign currency reserve.

She raised the topic of taking loans from the forex reserves at a meeting of the Executive Committee of the National Economic Council (ECNEC) last year.

Later, Bangladesh Bank and Finance Division took necessary effective measures in this regard.

In the financing of Ramnabad Channel, Bangladesh Bank will issue loan to Sonali Bank and Sonali Bank will disburse it to the Paira Port as loan.

The country’s foreign exchange reserves now stood a new record of over US$ 44.02 billion due to the upward trend of remittance.

On the outset of the ceremony, a theme song was played while a video on the Paira Port was screened.

Sheikh Hasina stressed on the necessity of boosting the country’s production and expansion of the market so that local products are exported after meeting domestic demand.

Referring to the dream of Father of the Nation Bangabandhu Sheikh Mujibur Rahman, she said he (Bangabandhu) wanted to make Bangladesh as a developed state and started the country’s economic development along with other initiatives to this end, but the assassinators’ stopped the journey of his dream by brutally killing him with other family members on August 15 in 1975.

Extending her gratitude to the country’s people, she said they have carried out this development as the people voted them power for a long term.

“Development is only possible when anyone can know the country and its people with affection,” she added. Sheikh Hasina also highlighted that the government has taken steps to increase the capacity of Chattogram port and the increased activities in Monga port while activities of Payra Port have started on a limited scale and there will be another port at Matarbari.