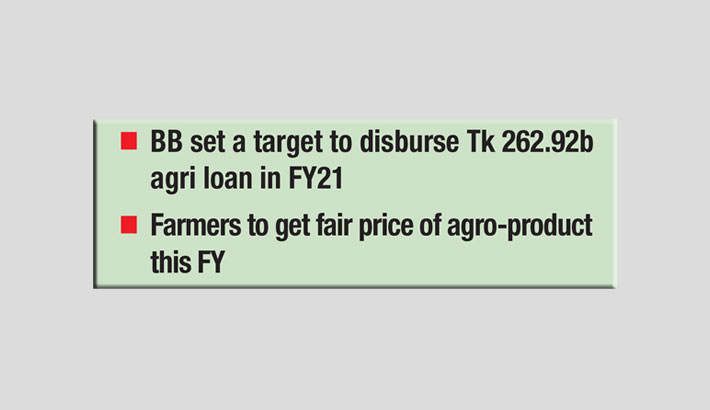 Agriculture loan disbursement grew by 15.79 per cent year-on-year during the July-December period of FY 2020-21, according to the half-yearly statement of the Agriculture Credit Department (ACD) of Bangladesh Bank (BB).

BB set a target to disburse Tk 262.92 billion in agriculture and rural credit in FY21, which is 8.99 per cent higher than the target set in FY20.

However, the disbursement of non-farms rural credit dropped by 3.40 per cent during the July-December period. At the same time, the recovery of agriculture and non-farm credit has increased by 26.39 per cent and 7.55 per cent.

Non-farm credit disbursement increased by 7.71 per cent and recovery dropped by 5.10 per cent in the first half of FY20.

“Around half of our labour force are working directly with the agriculture sector, while agriculture and farm sector became stable, the development other sectors would be stable,” said Dr ABM Mirza Azizul Islam, economist and former adviser of a caretaker government.

BB spokesperson Md. Serajul Islam on Thursday told the Daily Sun that the contribution of agriculture in the economy is more than 13 per cent and over 40 per cent of the labour force of the country directly and other portion of the population indirectly depend on agriculture, so the central bank always prioritises this sector.

He also said the recovery of agriculture loans has also increased as the borrowers of the agriculture sector are sincere about repaying their loans.

The farmers received a fair price of all the agro-product including paddy this fiscal year and they are taking fresh loans after repaying the previous loans, he added.