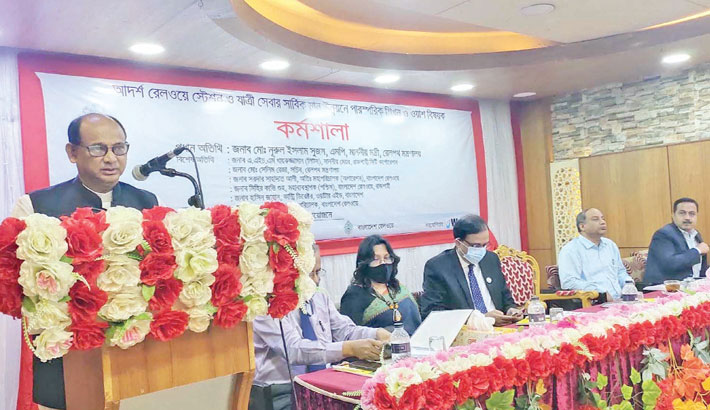 He said the government in general and Prime Minister Sheikh Hasina in particular is very much positive and sensible to ensure all sorts of requisite amenities including water, sanitation and hygiene to the railway passengers. That’s why diversified measures were adopted.

The minister made this observation while inaugurating a daylong workshop titled “Horizontal Learning and Water Sanitation and Hygiene (WASH) in Model Railway Station and Overall Passengers Services Improvement” at Nanking Darbar Hall in Rajshahi city as chief guest.

The Bangladesh Railway under the Ministry of Railways organised the workshop in association with WaterAid discussing and devising ways and means on how to provide hygienic toilets for passengers.

Minister Sujon asked the attending railway staff to discharge their duties with utmost sincerity and honesty to attain the passengers’ satisfaction as they are the valuable assets of the railways.

He stressed the need for replicating the best practices to other stations so that the passengers in general can derive total benefits of those. “You have to improve services related to water, sanitation and hygiene after the best uses of knowledge to be acquired from the workshop,” reminded the participants.

Listing various development projects of the railway sector the minister said present railway will be transformed into modern and time-fitting. He reiterated that the present government has a plan of recruiting 10,000 to 15,000 officers and employees within the shortest possible time to intensify the railway services.

Around 100 persons including 50 station masters and other staff members joined the workshop.

Earlier, Bangladesh Railway and WaterAid Bangladesh signed a deal under which the state-owned rail transport agency will get WaterAid’s technical support to improve water, sanitation and hygiene services for the passengers.

It will also support the horizontal learning among the railway staff to expand the public toilet and WASH services at other stations.