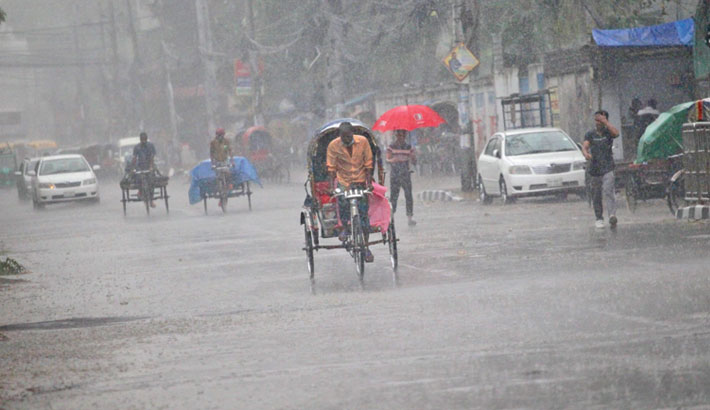 The season’s first nor’wester accompanied by rain and gusty wind hit the capital Dhaka and elsewhere in the country on Saturday.

The wind was blowing at a speed of 52 kilometres per hour in Dhaka. Besides, storm raged over Narayanganj, Munshiganj, Gazipur, Madaripur and Barishal districts.

Since morning, it was hot in the capital as the sky was cloudy. Before the rains began, a dust storm blew over the capital.

and the wind began to blow with great speed. At that time, all around was covered with dust.

The dust storm created a frightening situation in the capital. Many people were seen running here and there. When the dust storm stopped, after light rain, the wind brought peace. After a few days of continuous heat, the cool air brought peace.

Earlier in the morning, there was light to heavy rain outside Dhaka. Rain was reported in two places, especially in the north and east.

According to an airport official, several flights had to wait for landing at Hazrat Shahjalal International Airport due to the nor’wester in the capital while some flights aborted departure.

Bangladesh Meteorological Department said around 4:30pm on Saturday, there was little rain in Dhaka. However, there is a possibility of increasing the rain. There was little or light rain in many parts of the country, including Gazipur, Munshiganj, Barishal and Madaripur districts.

Earlier, Bangladesh Meteorological Department on Saturday predicted rain or thundershowers at one or two places over four divisions, including Dhaka, of the country in the next 24 hours commencing at 9:00am on Saturday.

According to a Met Office release issued on Saturday morning, trough of low lies over West Bengal and adjoining area. Seasonal low lies over South Bay.