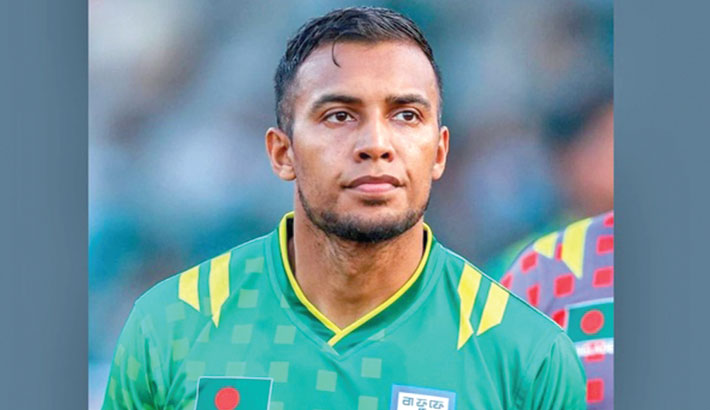 Bangladesh Football Federation won’t follow the same path of Bangladesh Cricket Board in letting their star players discarding national duty to play foreign leagues as their high-officials on Tuesday confirmed that they would make sure Jamal Bhuyan plays for their national team in the upcoming tri-nation tournament in Nepal.

“The national team management is looking after these matters. I didn’t have any conversations with Jamal yet. If it is in a FIFA window, he will have to play for the national team and the club has to release him,” BFF President Kazi Salahuddin told The Daily Sun.

“According to FIFA regulations, the club has to release a player if he is in the national team squad,” he added.

BFF announced a 24-member national squad and a seven-member U-23 squad for the upcoming Nepal Tri-nation Tournament involving the Kyrgyzstan U-23 team and the hosts where Jamal evidently made it to the list.

However, during the squad announcement press-conference, Bangladesh head coach Jamie Day feared that they might not get the service of Jamal in the upcoming tournament, scheduled to be held from March 23 to 29 at Dashrath Stadium in the Nepalese capital Kathmandu.

Bangladesh captain Jamal is currently in India playing for Kolkata Mohammedan Sporting Club in the ongoing I-league where his side is playing the playoffs of the competition.

“He (Jamal) has a game on 21 (March). It could be difficult for him to get in Nepal,” said Jamie in the press meet.

“We know what Jamal can do. We know Jamal is good enough for Bangladesh. If he comes to Nepal, it is great. If he doesn’t, no problem, we will bring the younger players to fill the bench,” he added.

BFF General Secretary Abu Nayeem Shohag said that they would send letters to Jamal and his current team to inform them that he would have to play for the national team in the upcoming FIFA window later this month.

“Tonight (Tuesday) we will send a letter to him as well as his club to play for the national team in the FIFA window,” he said.

“Actually he didn’t send any letter to us. As per FIFA regulations, he can’t do that. If there are any severe reasons like – personal commitments or anything like that only then he can only ask for it,” he added.

BCB earlier last month had to give the NOC to their star all-rounder Shakib Al Hasan, who was roped in by Kolkata Knight Riders for the upcoming Indian Premier League season after the player insisted the board to permit him.

The decision came as a bolt from the blue as Bangladesh have a two-Test series against Sri Lanka in Colombo during the same time.

BCB also said that they would do the same for pacer Mustafizur Rahman if he wants to play in the IPL but the left-arm pacer insisted that he is not ready to skip national duty for IPL.

BFF decided to participate in the tri-nation tournament in Nepal in the upcoming FIFA window after Afghanistan Football Federation confirmed that they would not travel to Bangladesh to play their Joint Qualification Round match.

The second-leg match for the FIFA World Cup 2022 and AFC Asian Cup 2023 between the two sides was scheduled on March 25 at the Sylhet District Stadium.

The match is now likely to be held in June in a neutral venue.

Defender Topu Barman and forward Nabib Newaj Ziban were ruled out of the team due to their injuries.

“We picked up 10 new players. It is an opportunity for them. If they are better than the players previously played for Bangladesh national team and if they are great then I will select from them for June which is the main target,” said Jamie.