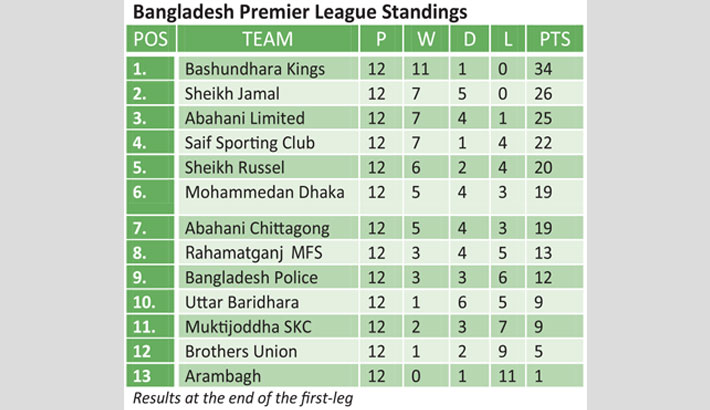 Reigning champions Bashundhara Kings have taken a massive lead with eight points after the first-leg of the ongoing Bangladesh Premier League football tournament.

Kings are leading on the points table with 34 points from 12 matches. They won 11 matches and drew just one.

who also remained unbeaten in the league with 26 points from 12 matches. Sheikh Jamal have stood second.

The first-leg of BPL ended on Sunday where Sheikh Jamal defeated Mohammedan Sporting Club Limited by 2-0 goals to break their six-match unbeaten streak in the league.

Muktijoddha Sangsad KC are struggling in 11th place with 9 points from 2 wins, 3 draws and 7 defeats, Brothers Union Limited 12th with 5 points from one win, 2 draws and 9 defeats and Arambagh Krira Sangha 13th with one point from one draw and 11 defeats.