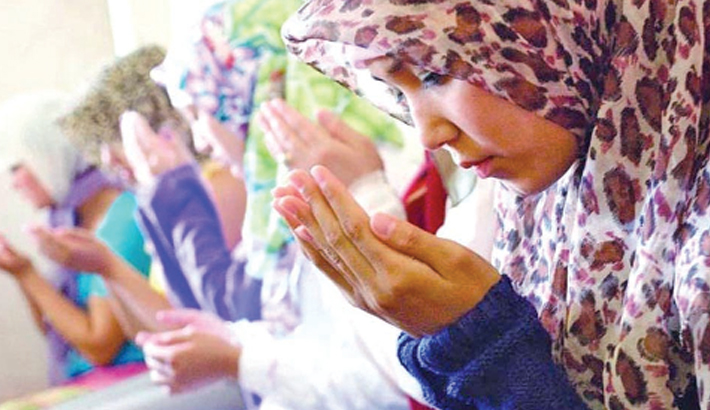 SOME people are unaware of the importance and value that Islam places upon women. Women who do not know this reality, as well as all people with insufficient knowledge of the Qur’an, try to protect their rights by working within their worldview, which follows the logic of unbelief.

A Muslim woman believes in Allah with a true heart, submits completely to Him, is aware that there is no other deity, that He is the Lord of every being and thing, and that He is All-Powerful. Therefore, she fears and respects only Him and seeks to win only His good pleasure.

She worships only Him, accepts only Him as her closest friend, and seeks only His help. She also knows that only He can direct good and bad toward her, and so lives in the full knowledge that she is dependent on Him. She knows that He keeps her alive, provides and cares for her, and protects and guards her. For these reasons, she has no expectations of other people.

She believes in Allah without the slightest doubt in her heart for her whole life, never losing heart or belief regardless of the circumstances.

She knows how to be grateful and content with her closeness to Him both when her life is good and when she is undergoing difficulties. She is in a state of constant submission, certain of our Lord’s love, compassion, forgiveness and providence.

When she encounters a problem, she knows that Allah has provided a solution in the Qur’an, and that what matters most is her continued sincere love, submission, and trust in Allah. She is certain of Allah’s promise that He creates everything according to His justice and with wisdom and goodness.

Even if her problems seem to go on forever, she never surrenders to hopelessness or worries when His help will come. Content with what He has sent her way, she maintains her patience and submission, knowing that something good will come out of it. She remembers what the Qur’an says about those who abandon their belief in such times. In addition, she recites “My Lord is with me and will guide me” (Qur’an, 42:62), just as the Prophets did when faced with hardship. Throughout her life, her profound faith enables her to see Allah’s compassion, closeness, love, help, and friendship at all times.

Allah created men and women for a purpose and revealed their responsibilities in the Qur’an. Men and women are required to lead the moral life prescribed by Allah, worship and serve Him, and to win His pleasure. They are required to tell people who are far from the happy and contented life about following the Qur’an’s teachings and to make a genuine effort to help them draw closer to Allah’s pleasure, mercy, and Paradise.

Some unbelieving women consider strength and willpower to be male characteristics, out of the mistaken belief that only men have to show strength and determination for themselves, as well as for the women in their charge, in the face of adversity. Thus, they consider it to be in their best interest to surrender to men’s intellect, willpower and strength. Especially when encountering trouble and difficulty, they lose whatever little strength and willpower they have and panic, and thus give themselves up to irrational and confused behaviour.

This pale and weak personality leads unbelieving women to pay too much attention to what other people think about them. Often, they knowingly do something wrong just to impress others or to win a respectable place among them. Likewise, if they are criticised, they feel belittled and disliked, and so feel devastated. Not understanding that what matters is their value in Allah’s Presence, they only seek the approval of people and end up being upset and distraught, thinking that all they ever do is a waste. As a result, they become depressed and lose their strength, willpower, and courage.

But Muslim women never stagger because of people’s criticism. Given that they measure themselves by the yardstick of the Qur’an, which spells out clearly what is right and what is wrong, they strive to live up to the Qur’anic morality. If they are criticised for doing so, they become even more determined and stronger in their pursuit of His good pleasure, which is the highest goal to pursue. Believing that only the Qur’an’s morality gives them any value in this world and the next, they do not care what other people think of them.

The only solution is the Qur’an, which provides the easiest, as well as the most content and beautiful path, by which to live. The only path that can lead toward righteousness is His path, for only it leads to goodness and prosperity. Allah reveals that the Qur’an brings people honour and dignity, and that all who abide by its values and follow this righteous path will find success in everything they undertake.

All true and lasting solutions to false ideas about women are found in the Qur’an. Islam, which was revealed to guide humanity to salvation, genuinely values women. Many verses protect women and their rights, for the Qur’an eliminated the prevalent misguided stereotypes of women and gave them a respectable position in society. Our Lord teaches that superiority in His Presence is based not on gender, but rather on one’s fear and respect of Allah, faith, good character, devotion, and dedication to Him.

Allah has revealed the steps that women need to take to ensure their protection and respect within society, and for them to find the love and dignity that they deserve. All of these measures benefit women and seek to prevent damage to their interests or any form of oppression and unnecessary stress.