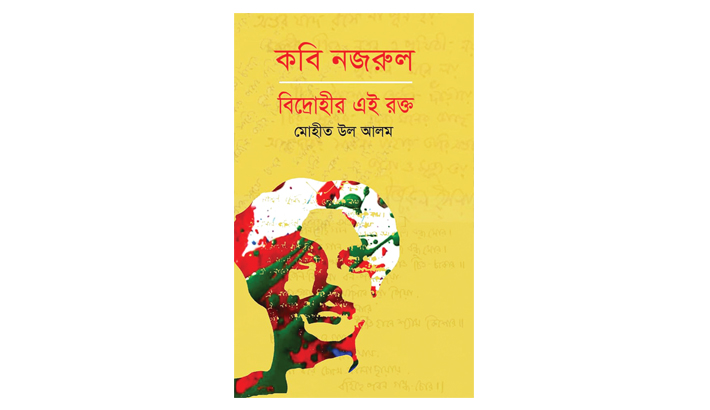 Kazi Nazrul Islam is not just a name, but a life force to me since my childhood. I used to sing his sings, recite his verses, get intoxicated in the words of his love poems, get charged with excitement and utmost courage while reading his protest poetry and be enlightened by his clear-cut and bold egalitarian spirit. His works have contributed to shape my ideologies. So, whenever I see a research-based book on poet Nazrul, I become very curious to know more about him from the multifaceted perspectives of other renowned intellectuals.

Recently, one of the esteemed professors of Bangladesh has published a series of his own research articles in a form of a book. I could not help but buy the book and started reading it. I must say that the writer has showcased Nazrul’s versatility in one single binding which made his book prismatic, informative and enlightening.

Published very recently by Annoy Prokash, Kobi Nazrul: Bidrohir Ei Rokto is written by eminent academic and writer Professor Dr. Mohit Ul Alam. The book contains 16 articles which are written in a time span of two decades and then compiled altogether. He composed the essays by amalgamating history, literature, theory and his own understanding.

Alam clearly writes that the title of the book “Bidrohir Ei Rokto” is borrowed from Nazrul’s poem “Bijoyini”. I really admire the way he dedicated this piece of work to one of the greatest Nazrulgeeti singers of Bangladesh Late Firoza Begum. In my opinion, a magnificent book like this one must be dedicated to someone who is relevant and equally dazzling in the same field. So, Kudos to the writer! The first page touched my mind successfully. I felt emotionally charged to dive deep into the sea of words written on the next 128 pages.

The book starts with the first essay, “Nazrul: Bangabandhu: Bangladesh” in which Alam logically and historically establishes the connection between the Father of the Nation and Our National Poet Nazrul. By quoting Ahmed Sofa’s statement in the very first paragraph, Alam agrees that Nazrul has a deeply rooted connection with Bangladesh. Alam claims Bangabandhu played the role of “dai-ma” (foster mother) in firmly establishing this umbilical connection. According to Alam, both Nazrul and Bangabandhu wanted to establish non-communism and economic equality. Both of them preferred armed battle instead of following Gandhism. Alam also appreciates Bangabandhu for bringing Nazrul to this land and declare him as the “National Poet” of Bangladesh.

In the next essay, “Jatiya Kobi Kazi Nazrul Islam: Ekti Proshner Obotarona”, Alam bravely displays the contradiction in calling Nazrul the “National Poet”. He shows the contrast between Rabindranath Tagore and Kazi Nazrul Islam. However, it is very important to note that nowhere in this book, Alam compares these two unique writers.

Tagore has always been adored by the elite class of our country. On the other hand, Nazrul is the poet of the subaltern and marginalized people. Alam sarcastically comments that “since Nazrul was a Muslim and composed Hamd and Naath and Bangladesh was a Muslim majority country, Nazrul was declared the National poet of the country”. Nonetheless, we could never really accommodate Nazrul’s spirit, rather always tried to contain him to use him politically. Alam cites Stephen Greenblatt’s “Containment theory” to support his point. I found this piece of information extremely important.

The third article, “Nazrulke Rajnoitikbhabe Byabohar”, is a kind of extension of the second one. Alam quotes Dr. Rachael Fell McDermott, who is famous for her book “Singing to the Goddess”, “Two Bangals (East and West) celebrate two different Nazruls: Islamic Nazrul in Bangladesh and Nazrul of the Shyama Sangeet in the West Bengal”. This sheer truth has been written and analysed with grace and boldness by Alam too. He urges his readers to accommodate Nazrul’s ideologies in their psyche as mentioned in the 14th essay, “Jatiya Kobike Attikoron o Korte Hobe”.

In the next two essays, Alam accentuates Nazrul’s egalitarianism and rebellious spirit by examining Nazrul’s poems like “Manus”, “Shamyabadi”, and also by relating Nazrul’s non-communal ideology to Amartya Sen’s notable work “Freedom to Think” in which the protagonist Kader Mia had to die in a politically, religiously and economically imbalanced society due to two significant reasons: one, because he was a victim of Hindu-Muslim communal riot and two, because he was poor.

In “Nazruler Daridrototto”, Alam shows how gracefully and confidently Nazrul embraced poverty. He mentions that Nazrul views poverty as a matter of attaining greatness. Also, Nazrul also believes that poverty is nothing but a socioeconomic matter in which religion plays an important role. Alam’s use of the linking words like “prothomoto” and “ditiyoto” makes his essays well comprehensible.

I really enjoyed reading the sixth article “Kobi Nazruler Bangla Bhashar Maddhyome Dhormoke Porichito Korar Procheshtha” in which he again writes the truth fearlessly. In our country, we tend to believe in everything written or spoken in the holy language. Without even understanding a word or two, we just memorize the Quranic verses. Nazrul’s attempt of vernacularizing Islam is indeed a courageous effort. Alam appreciates Nazrul’s desire to enlighten ordinary people with the religious knowledge. The writer then historicizes the act of translating the Holy Scriptures in the language of the common people. He writes about William Tyndale who translated the holy Bible from Greek and Hebrew into English so that the ordinary people could understand the gist of it. Nazrul did the same thing in his own way. Alam brings this important aspect of Nazrul to his writing which is praiseworthy and ground-breaking.

Although Nazrul is our National Poet, practically we have not accommodated him politically. In a democratic country like ours, Nazrul’s vertical individualism and “Damn care attitude” cannot be accumulated by the entire sociopolitical structure. Alam asserts his opinion regarding Nazrul’s way of thinking in “Ami Aponare Chhara Korina Kahare Kurnish”. In one point, Nazrul bravely declares to remain carefree and bold. In the other point, Nazrul shows his gratitude to the writers’ society who gave him shelter and love. Alam clearly mentions both points in his essay. This is how Professor Alam proves to be a true and non-biased scholar.

Alam uses historical and theoretical frames to support his points. He quotes significant scholars like Edward Said and Prity Kumar Mitra. The reading of Nazrul’s work significantly contributes to the study of Edward Said’s anti-colonial resistance and cultural and imperial opposition. I was delighted to find out that Alam quotes Said from his famous 1978 book Orientalism, “Indeed, my real argument is that Orientalism is—and does not simply represent—a considerable dimension of modern political-intellectual culture, and as such less to do with the Orient than it does with ‘our’ world”.

History bristles with contradictions, ironies and paradoxes. When we read Nazrul’s protest poem, it gets hard to believe that in the superlatively romantic poet also resides in the same body. Alam beautifully writes about it in “Bnasher Bnashiar Ronoturjo: Nazruler Doittyosottar Alochona”. I really value Alam’s analysis due to his original thought process along with the vast knowledge on the subject matter.

Generally, we are exposed to Nazrul’s mainstream and widely discussed aspects which are included in this book. However, Alam writes about the least discussed and less known facts about Nazrul in a few essays. In “Nazruler Trishal”, Alam depicts Nazrul’s visit and stay at Trishal which made a remote village like Trishal an important place to visit. Since the author had been a Vice Chancellor in JKKNIU, he examined the place and came across many interesting facts. For example, Alam mentions, “the stories of Nazrul’s flute playing under a Bunyan tree, book reading and day-time siesta have been part of the folklore of the people in Trishal”.

In “Nazrul o Chattogramer Alam Poribar”, Alam writes about Nazrul’s engagement with the famous Alam family. Nazrul and Mahbub Ul Alam, awarded the prestigious Ekushe Padak for his contribution to Bangla literature, had an interesting similarity. They both were comrades and took active part in the First World War. Mahbub Ul Alam first met Nazrul when he visited Habibullah Bahar in 1928. Alam cites from Mabhub Ul Alam’s essay from which we get to know many thought-provoking information about poet Nazrul.

Nazrul’s influence is equally prominent in our lives during this pandemic too. The last article of the book optimistically views Nazrul’s works as a remedy to the unmanageable grief caused by the pandemic. Alam claims that preventing Corona means to serve people. We need to serve people the way Nazrul did quoting Whitman, “Behold, I do not give a little charity/when I give, I give myself”. The last article, therefore, seems the writer’s call to the entire human race to develop humane qualities and be kinder during this difficult time.

Although Professor MohitUlAlam is renowned for his scholarship in Shakespeare Studies, in my opinion, he is an expert in Nazrul Studies too. “Kobi Nazrul: Bidrohir Ei Rokto” is a prominent addition to Nazrul Studies written in Bangla. Researchers will definitely get benefitted from this book while writing academic research papers both in English and Bangla.