‘Windy conditions will be helpful for Olympic preparations’ 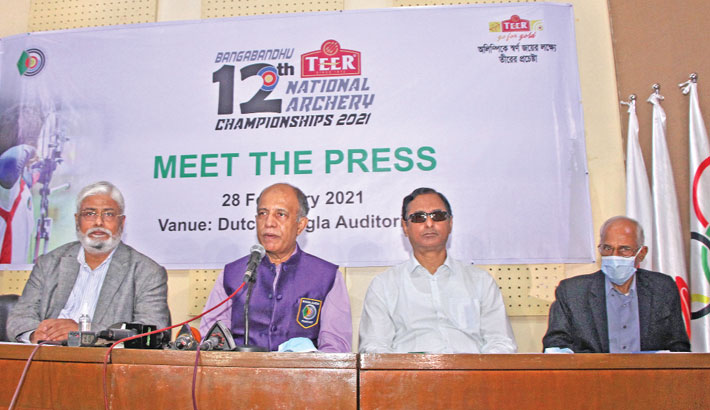 Bangabandhu 12th Teer National Archery Championships will be held from March 1 to 4 at Sheikh Kamal International Stadium in Cox's Bazar. A total of 148 archers -- including 68 recurve men, 30 recurve women, 30 compound men and 20 compound women -- from 40 service teams, clubs and district sports associations will compete for 60 medals.

“We had a plan earlier to send our Olympics participants in Japan to adopt their strong windy condition ahead of the main event, but COVID-19 stopped us. So, we have decided to arrange Bangabandhu National Archery in Cox's Bazar. Our national archers will take part there along with others. It will help them to adapt to the windy conditions and to make preparations for Tokyo Olympics,” he said in a pre-event press conference at Bangladesh Olympic Association auditorium. BAF general secretary Kazi Rajib Uddin Ahmed Chapal, City Group Executive Director Zafor Uddin Siddiqui and BAF other officials were also present there.

Chapal said that they would arrange some more competitions in the strong windy conditions for national archers ahead of the Olympics.

“We are for the first time arranging archery competitions in Cox’s Bazar. We will continue it with the help of City Group after the Olympics. We were the first federation to resume national team camp after the COVID-19, later we have also arranged some competitions,” he said.  “It is too difficult to claim gold in Olympics. Our target is to display a good performance and to achieve a satisfactory result there,” he added.