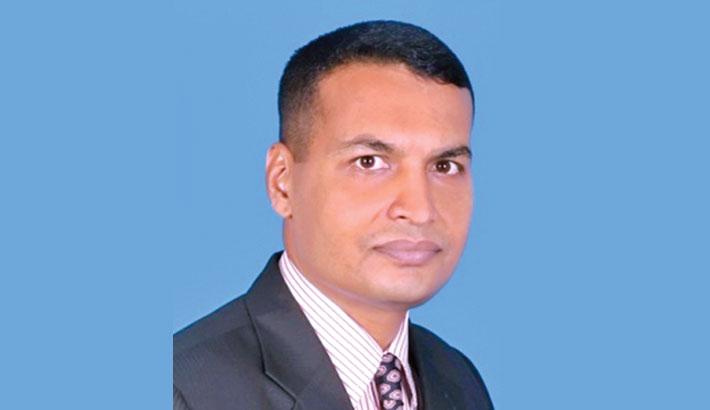 Roman mythology dates the founding of Rome at around 753 BC (Before Christ). Eventually, the city successively became the capital of the Roman Kingdom and present day Italy. The origin of the name is believed to have come from the city's founder and first king, Romulus. This city is regarded as the birthplace of Western civilisation and by some as the Capital of the World. Its historic centre is listed by UNESCO as a World Heritage Site. Most of the city of Rome is to the east of the Tiber River. July and August are the warmest months here. This is a pretty interesting fact that Rome was the first city in world history to reach 1 million inhabitants.

Fortunately I visited this city in December 2016 with one of my friends. Our tour was for two days and we stayed in an apartment in the Termini area. The main railway station of or Rome which is second largest in Europe is located here. It has connectivity with cities of native and neighbouring countries. This area is also the hub of metro and bus communication. Termini is perceived as Rome's Chinatown. Immigrants from more than a hundred different countries reside there.

Italy has the second largest Bangladeshi community in Europe after Britain. Hardly a street can be found in Rome without a Bangladeshi-run mini-market. We also noticed the presence of a big Bangladeshi community in the Termini area. Semi-circular shaped Republic Square is located on the northern edge of this area. A Basilica of the 16th century is situated at its east. The Fountain of the Naiads occupies the central part of the square. The central figure of the fountain is Glaucus, a mortal fisherman-turned sea god, wrestling with a dolphin which spouts a powerful jet of water. It symbolizes dominance of mankind over natural forces. There are more than 2000 fountains in Rome. Many thirsty tourists fail to realise that the water from most public fountains is cold, delicious and fresh.

We visited the Colosseum, which is still today the largest amphitheatre in the world. According to several sources, its construction started in 72 AD and lasted nearly 8 years. It was principally built from limestone, brick, concrete and volcanic stone. Gladiator shows and other public events used to take place here. The Colosseum could hold more than 50,000 spectators at its maximum capacity. Visitors could access the Roman Colosseum through 80 gates. This elliptical shaped structure had an elaborate system of water supply. After the 6th century AD by effects of weather, natural disasters, neglect and vandalism most artefacts of this structure were destroyed. It got its present shape after several restoration efforts. We learned there were four levels or sections for the spectators to watch. Large tunnels beneath used to accommodate fighters and animals in ancient times. The remains of the largest barracks for gladiators can be seen at its east. A tunnel connected the arena directly to the east entrance of the Colosseum. Present day sports stadium design is clearly based on this oval Roman plan. 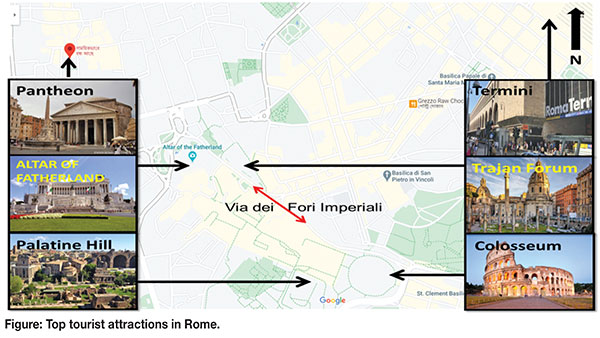 The Palatine Hill is at the west of the Colosseum. It is considered to be the birthplace of the Italian capital and is believed to have been inhabited since the year 1000 BC. Here ruins can be traced of hundreds of imposing buildings of high Roman society of ancient times. The Palatine Hill is a very pleasant place for a quiet stroll under the shadow of the trees while passing many of the preserved corners of ancient Rome. Upper class citizens built their palaces here for the incredible views. In fact, the word palace comes from the proper name of Palatine Hill. Few important structures of this place are ruins of the Flavian palace, stadium of Domitian, hut of Romulus, house of Augustus, house of Livia. The Temple of Venus and Roma located here is thought to be the largest temple in Ancient Rome.

The Roman Forum is situated further west. It began as a marketplace but became the economic, political, and religious center. Archaeologists believe the establishment of the forum was the result of a deliberate and large-scale landfill project. Prominent monuments that can be traced are Carcer prison, Regia, Temple of Vesta, Arch of Titus, Lacus Curtius, various columns, and basilicas. The Via Sacra was the main street of ancient Rome which connected this area towards Colosseum.

Road Via dei Fori Imperiali demarcated boundary between area Roman Forum and Forum of Trajan. The latter is in the North. Several rows of re-erected columns can be seen here. We saw many people wandering amid the ruins of the Forum of Trajan. Here remnants of a big multi-floored mall can be traced which is thought to be the world's oldest shopping mall. The shops and apartments were built in multi-level between the years of 100 and 110 AD. These structures remind, Rome was for a period one of the world's main epicentres of classical architecture. They developed new forms such as the arch, the dome and the vault. The Romanesque style was widely used in structures constructed in the 11th, 12th, and 13th centuries. The most dominant feature in Romanesque Architecture is the round arch. Later the city became one of the main centres of Renaissance, Baroque and Neoclassical architecture. Roman inventions like Roman numerals, newspaper, modern plumbing, sanitary management, air condition, and aqueducts concepts are still followed.

The Altar of the Fatherland located west of this site caught our attention. It was constructed to honour Victor Emanuel II, the first king of united Italy. The equestrian statue in the centre of the monument is in fact a portrait of him. This monument is made of marble and features elaborate staircases, columns, fountains and statues. The two fountains at either end of the monument represent the seas surrounding the Italian peninsula, the Adriatic Sea and the Tyrrhenian Sea. The medieval popular quarters of the city, situated adjacent to this area were largely demolished at the end of the 19th century.

Following a cobblestone road we preceded further North West to visit The Pantheon. Rome’s cobblestones are known as “sampietrini”. This is an art doomed to disappear since it's completely handcrafted. The Pantheon was built as a temple dedicated to "all the gods of the past, present and future". It was built around 125 AD. It is indeed stunning that almost two thousand years after it was built, the Pantheon's dome is still the world's largest unreinforced concrete dome. Its interior is also amazing and well decorated in ornate and intricate designs. Its massive 16 Corinthian columns were brought all the way from Egypt. The oculus at the dome is the only source of light inside the Pantheon. Famous painter, architect and poet Michelangelo commented it as “the work of angels and not of men”. There is a fountain and obelisk surrounded by outside dining and tourist shops.

Exiting the place, approaching little north we came across Venchi chocolate shop. The whole shop is wonderfully decorated, with a wall of liquid chocolate fountain behind the servers. The chocolate scent in the air overwhelmed us. The place was crowded. We enjoyed hot chocolate which was startling. The sun had set by then. From the adjacent shop we bought a few packs of the famous pasta as souvenirs. Pasta is an integral part of Italy’s food history. Rome has a museum dedicated entirely to pasta. Returning to Termini we had our lunch. Rome's cuisine has evolved through centuries and periods of social, cultural and political changes. Italians are “allergic” to people who drink cappuccino coffee after lunch or dinner. The streets of Rome are bustling with locals and tourists, and lined with shops and restaurants.

The next morning we went out for sightseeing by tour bus. We noticed the city is very green. Public parks and nature reserves cover a large area of Rome. There are also many modern theme parks and amusement parks which attract tourists. Few stadiums also caught our eye. The city hosted the final games of the 1934 and 1990 World Cup Soccer. Rome hosted the 1960 Summer Olympics. The streets of Rome are often referred to as an “outdoor museum” due to the presence of many artefacts and some of the city’s finest art. The famous Roman ruins in Rome are just a small fraction of the remains of the Roman civilisation as most of the area is still uncovered.

Our trip to Vatican City demands a separate write up. After lunch we departed for Fiumicino International Airport to catch our flight.  It is the busiest airport in Italy. The airport serves as the main hub for Alitalia, the largest Italian airline. Shortly after takeoff, peeping through the window I could see the Mediterranean coast line. The city faded in the horizon leaving lasting memories to cherish.

Few other important monuments and sites of ancient Rome includes the Domus Aurea, the Catacombs, the Circus Maximus, the Baths of Caracalla, Castel Sant' Angelo, the Mausoleum of Augustus, the Ara Pacis, the Arch of Constantine, the Pyramid of Cestius, the Bocca della Verità and many more. Its museums reflect rich history and heritage. Rome is also widely recognised as a world fashion capital. Rome contains a vast and impressive collection of art, sculpture, fountains, mosaics, frescoes and paintings from different periods. Antiques, collectables, clothing, shoes, vinyl and CDs at weekend markets located along some of Rome’s most frequented streets and squares also attract tourists. Surely seamless blend of old world wonders and modern delights make this city one of the most important tourist destinations of the world.

The author is a Civil Engineer and a serving Military Officer