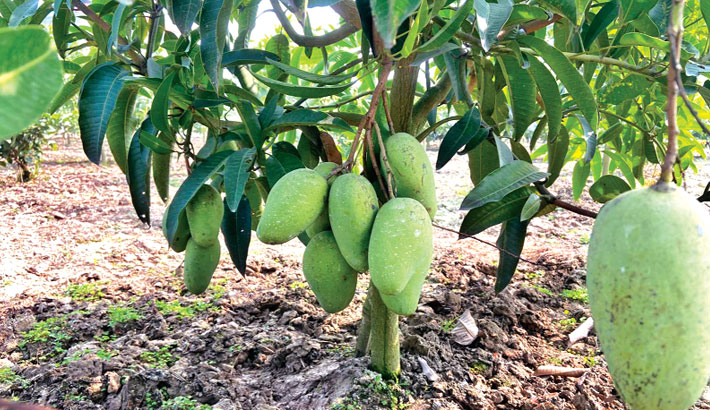 Commercial farming of all-season mango has gained popularity among the farmers across the country due to its profitability and growing demand in the market.

Initially, some orchard owners have started growing Katimon mango, an all-season mango variety, due to its commercial value and demand.

“The total soluble solids (TSS) of a regular mango are 23-24 while TSS of Katimon is 27. It has beautiful shapes with less fibre, good test and can be preserved for a long time,” he added.

He said Katimon mango is also known as Amroto in Bengali for its delicious test.

Many orchard owners have already set up commercial orchards to grow this mango variety.

“Post-harvest loose of this mango is lower than other varieties. Price is higher at Tk 400-500 per kg,” said Talha Zubair Masror Upazila Agriculture Officer of Chuadanga Sadar.

He said due to its good return, many farmers started to plant this mango variety in their orchard.

“Some pruning technique and spending adequate fertilizer can deliver a good production of this variety,’ added he.

Zabalul Bashar Selim, an orchard owner at Gaidghat village in Chuadanga sadar upazilas, told the Daily Sun that he planted 1,000 saplings of Katimon mango on 13.5 bighas of land.

He started to sell mango in December 2019 and last year he harvested mango from his orchard in six phases and plucked around 100 kgs of mango in each phase.

He sends his mango to Dhaka, Chattogram and other big cities as the demand is higher in the urban areas.

Cultivation of these mango varieties has started in 2016, now we are extending the commercial cultivation across the country, said the director of Year-Round Fruit Production for Nutrition Improvement.

Currently, 14 tonnes of Katimon mangoes are being produced from 200 hectors of land across the country.