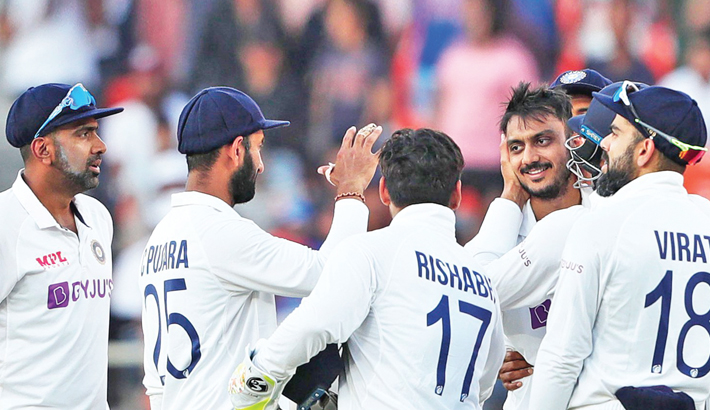 Indian players celebrate after taking a wicket in their day-night third Test against England at Narendra Modi Stadium in Ahmedabad on Thursday. – Collected PHOTO

India on Thursday completed an emphatic 10-wicket win over England in their day-night third Test in a rare victory inside two days.

Rohit Sharma hit a six to see India to their target of 49 without losing a wicket and give his side a 2-1 lead in the four match series.

Spinner Axar Patel claimed a match tally of 10 wickets to bundle out England for 112 and 81 in the first and second innings.

Axar Patel claimed five wickets and Ashwin four in the second session of play on a viciously turning track.

Ashwin became the fourth Indian bowler after Anil Kumble (619), Kapil Dev (434) and Harbhajan Singh (417) to enter the 400-wicket club after trapping Jofra Archer lbw for nought. Patel claimed Zak Crawley with the first ball of the innings and got Jonny Bairstow for his second zero in two innings on the third delivery.

Skipper Joe Root, who took five wickets with the ball earlier, put on 31 runs for the fourth wicket with Ben Stokes who top-scored with 25. Root made 19. Earlier India were bowled out for 145 in the opening session in response to England's 112. The result means England can’t go into the world Test championship final anymore against New Zealand at Lord’s this year.

England can still spoil India’s party, who are now favourites to join New Zealand, if they beat them in the fourth Test at the same venue.

Australia will qualify for the final if the series finishes 2-2 while India still will have chance to qualify if the final Test finishes in a draw.