Over 60pc in favour of school reopening 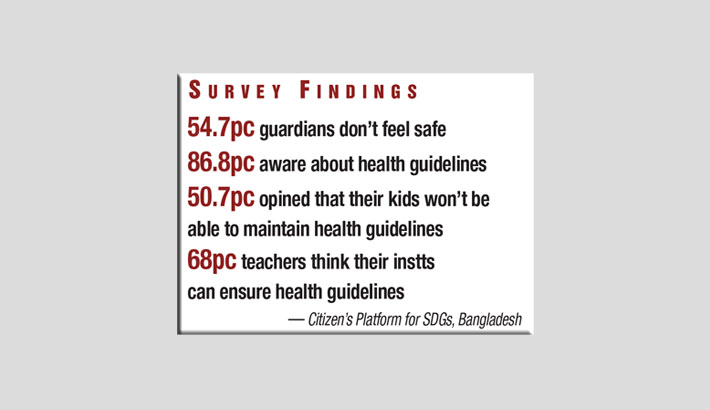 Around 60.5 percent people excluding parents and teachers are in favour of reopening schools while 52 percent people fear that the number of Covid-19 infected people will rise if any such decision is taken, finds a new survey.

The Citizen’s Platform for SDGs, Bangladesh on Tuesday unveiled the survey findings in a virtual dialogue after completing the survey titled ‘Finally schools will reopen: How much we are prepared’.

Some 54.7 percent guardians have said that they don’t feel safe to send their children to schools at the moment.

About 67 percent of the guardians are not interested in paying extra fees for their children’s protection, according to the survey. Of the teachers who took part in the survey, 68 percent have said that their institutions have the capacity to ensure health guidelines.

Some 87 percent of the teachers have stated that they feel safe to go to school. Apart from the guardians and teachers, 56.4 percent people who are involved in different professions have opined that the health guidelines issued by the government can be implemented.

Addressing the programme as the convener of the Citizen’s Platform for SDGs, Bangladesh and CPD’s distinguished fellow Dr Debapriya Bhattacharya said, “A mixed reaction is seen regarding reopening schools. Not all are equally prepared to reopen schools. There is a difference between the preparations of government and nongovernment schools and schools of cities and villages.”

Executive Director of Campaign for Popular Education (CAMPE) Rasheda K Chowdhury, who was present as the special guest, said, “Besides schools, students need to be brought back to the process of education. A combined effort of the government, civil society, non-government organisations and individuals is necessary in this regard.”