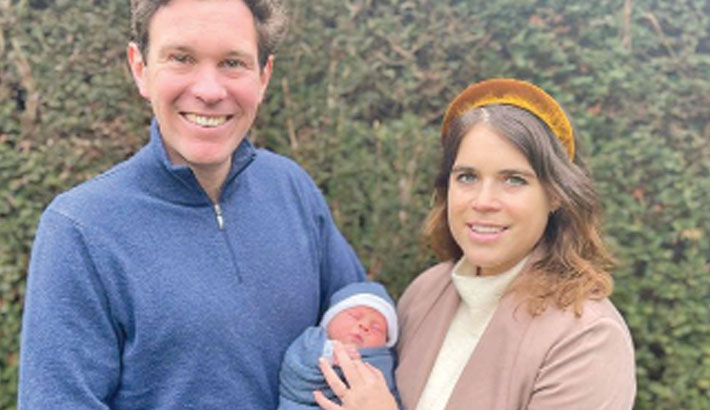 The announcement was made by Buckingham Palace, along with the release of a new family picture.

In the image the baby can be seen wrapped cosily in a blue knitted blanket, holding his mum’s finger tightly. August, who was born on 9 February, is the Queen and Duke of Edinburgh’s ninth great-grandchild.

Princess Eugenie is the third of the Queen’s four granddaughters and is ninth-in-line to the throne.

The choice of the baby’s middle name Philip likely pays tribute to her grandfather, who is currently a patient at the King Edward VII hospital, having been admitted on Tuesday.

Even though August’s mum is a princess, he will not be an HRH nor hold a title, unless the Queen decides otherwise. This is because he was born down the female line of the Royal Family.

The latest addition to the Royal Family was born at the exclusive Portland hospital in London, weighing 8lbs 1oz.

He was born 11th in line to the throne but will move to 12th place in the line of succession after it was announced that the Duke and Duchess of Sussex are expecting their second child.

Sharing the photograph on her Instagram, Eugenie wrote: “Our hearts are full of love for this little human, words can’t express.”

She said the photographs were taken by their “wonderful” midwife, adding: “Thank you to the wonderful essential workers including our midwife who came to discharge our boy.”.