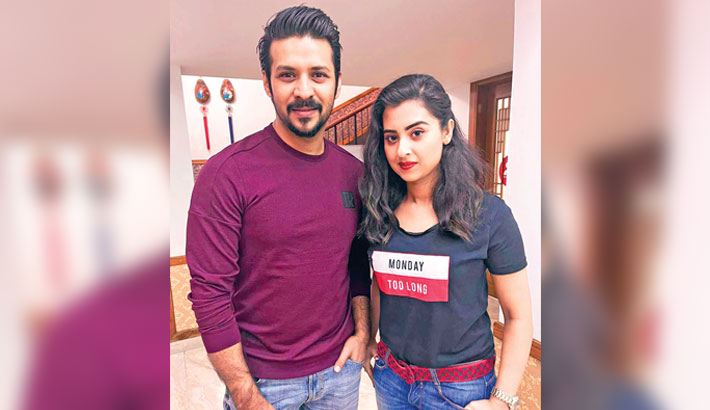 Popular Dhallywood actress Shabnom Bubly has returned to acting after a two-year hiatus. Now, the actress will be seen in the movie ‘Chokh’. Bubly also signed a deal with the production house Shapla Media for the film at a hotel in the capital’s Gulshan area on Monday.

Directed by Asif Iqbal Jewel, the film has been scripted by Anamika Mondol. This will be the second film of Bubly-Nirab pair.

About the film, Bubly said, “I’m very selective about script. The story of the film Chokh is  amazing and my character is very nice. That’s why I have signed the movie. In ‘Chokh’ the audience will see me as a corporate lady. I don’t want to reveal much about the movie now. I’m very much optimistic about this project.”

Nirab said, “Before this movie, I and Bubly have worked in the movie ‘Casino’. The pattern of the film ‘Chokh’ is completely different from ‘Casino’. I’m very excited to work in the movie.”

Produced by Shapla Media, the shooting of this thriller movie will begin in this month.

Shabnom Yesmin Bubly is a popular film actress of the country. She started her career in the media as a television news presenter. She made her acting debut in the film ‘Bossgiri’ with Shakib Khan, and since then the two have collaborated multiple times.

After acting in seven consecutive movies with Shakib Khan, Bubly paired up with Nirab Hossain in 2019 for the film Casino directed by Saikat Nasir. Since debut, Casino is Bubly’s first movie without starring against Shakib Khan.

Md Shakhawat Hossain Nirab commonly known as Nirab Hossain, is a film actor and model. Nirab started his career by modeling. He made his debut with the 2009 film ‘Mon Jekhane Hridoy Sekhane’ opposite Apu Biswas and Shakib Khan.