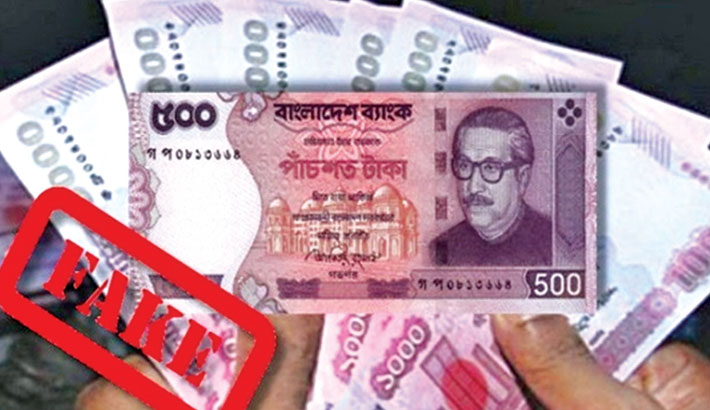 The widespread circulation of counterfeit money is regarded as a huge threat to a country’s economy due to many reasons. Note counterfeiting decreases the acceptability of cash among the people and commodity prices go up due to the circulation of more money in the economy. People deceived with the counterfeit money do not get reimbursement which is sometimes of huge economic loss for them. Sometimes, innocent people, being suspected to be linked with counterfeit gangs and nabbed by police, face punishment for failing to prove themselves not guilty which is very much disgraceful both in their family and the society they live in. That is why Central Banks of every country are very much careful in the selection of banknote paper, design and other security issues so that their notes cannot be easily imitated by the fake note racketeers.

Like many other countries, some racketeers have also been doing their business with fake notes in our country for long. Statistics received from Bangladesh Bank reveal that number of fake notes seized in different places of our country has decreased a lot and this can be attributed to many commendable steps taken by Bangladesh Bank. Earlier note counterfeiters would print and release counterfeit notes worth several hundred crore taka on the eve of the Holy Eid-ul-Azha every year. But their ill activities became thwarted when different banks started providing note detecting service free of cost to the cattle traders by setting up fake note detecting booth in all authorised cattle markets all over the country and deploying their expert bank officers with fake note detecting machines with regard to the order of Bangladesh Bank. This measure created fear among the fake note traders regarding the fact that expert bank officers are in these cattle hut and trading fake notes here will certainly jeopardise them.

Note detecting service by the expert bank officers in the cattle market all over the country has been in practice since the year 2011. Advertisement on the security features of banknotes is published in different widely circulated English and Bengali dailies on regular basis to get our people introduced to these security features. Workshops on raising public awareness about fake notes with the participation of officers and employees of different government and non-government offices, public representatives, shopkeepers, farmers and people of many other professions are held in the fake note prone areas at different times. Bangladesh Bank with the collaboration of Sonali Bank of the concerned areas organises these workshops. People get the scope of being introduced with genuine and fake notes practically in such workshops. Banks have also been advised to take cautionary measures for preventing the intrusion of fake notes. Bank customers can check their money with fake note detecting machines after getting payment from the payment counter in the banks now.

Security features of our bank notes are of world standard. UV varnishing feature in 100, 500 and 1000 taka notes to make these dust-free and shiny, new design security threads and densely designed UV fibre in 100, 500 and 1000 taka notes, rolling horizontal bar in the OVI part introduced in the very firstly released 200 taka note- all these features make our notes very hard to be imitated for the counterfeiters. Our law enforcers are also very much active against note counterfeiters.

The counterfeit notes that are sometimes seized somewhere in our country are very easily detectable. Many things are to be done in this regard. Targeting every family of our country, security features of genuine banknotes can be printed in the textbook thinking that these textbooks will be kept in the family at least for 1 year and the family members would easily be able to know the security features at any time they want. Audio-visuals on the note’s security features can be propagated in social media more and more. Questions can also be made in the mega recruitment exams like BCS, BRC, Primary teacher’s recruitment exam etc to make more people know this well.

It is observed that note counterfeiting culprits get bail within days after they are arrested. These cases are not disposed of even after a decade. So these culprits are not in fear of the fact that they will be punished for this heinous act. That is why the same people are found doing fake note trading for years.

What is required to prevent fake note are- police investigating officers should be more cautious in filing case and framing charge sheet so that the culprits do not get bail easily, while prosecutors should be more strategic in making arguments during hearing etc, BGB force should be more alert in preventing the smuggling of fake notes into our country from the neighbouring countries, Bank officers should be assigned for cash duty only after they develop the skill of detecting fake and genuine notes. Still, only Bangladesh Bank and law enforcement authorities cannot root out fake notes from our country. People from all walks of life should come forward to stand against this social menace.

The writer is a Joint Director of Bangladesh Bank.