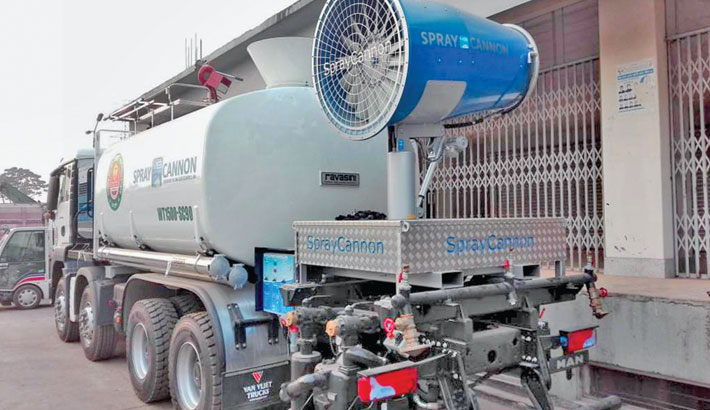 DNCC engineers said they received two mist sprayers on Tuesday. This equipment is more capable and feasible to suppress dust more efficiently than a traditional sprayer.

They also said each unit has high-pressure water system used for removing and cleaning the dust in the air and other harmful dust on the land.  It has 15,000 litres water reservoir system which can be sprayed angling the nozzle 360 degrees.

The spray bar and heavy-duty mist spray machine can be used together for high-performance cleaning, particularly around building sites or on environmental cleanness operations, they added.

Md Khurshed Alam, manager of Sohel Engineering & Construction Ltd, a private company that supplied the machine, informed that the water tank of the sprayer has an airflow capacity of 61,800 m3/H and Water flow capacity is 4000 ltr/H while the water gun can spray in a 40-meter range.

“All the water spray, as well as cleaning system, can be controlled from the PTO of Truck Chassis and heavy-duty spray cannon by the extra generator set. Flat spraying nozzle type spray bar is set in front and rear end of the vehicle for spraying and watering.”

The two units cost DNCC Tk 134.2 million. Flat spraying nozzle type spray bar is mounted on the front and rear end of the vehicle for spraying and watering.