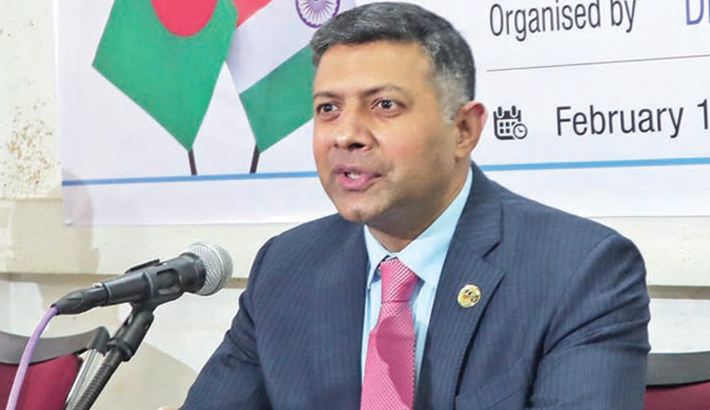 Indian High Commissioner to Bangladesh Vikram Doraiswami speaks at DCAB Talk at the Jatiya Press Club in the capital on Monday.

Indian High Commissioner to Bangladesh Vikram Doraiswami on Monday said the trial of Pakistan occupation army who committed genocide during the Liberation War of Bangladesh in 1971 can be held anytime as there is no statute of limitations in terms of times.

“I think we should be clear about it without getting into legal formalities,” he said. Vikram Doraiswami made the remarks while speaking at DCAB Talk at Jatiya Press Club in the capital on Monday.

He said there is no statute of limitation on any kind of arrangement that may have been made and this is something entirely in the government of Bangladesh to assess the history and see how this goes forward.

The Indian HC came up with the remarks when he was asked which provision of the 1974 tripartite agreement is holding back to try the Pakistani generals who committed genocide during the War of Liberation in 1971.

“History is history,” said the High Commissioner, noting that the question is historically very relevant in this historic year when Bangladesh is set to celebrate 50 years of its Independence.

Bangladesh has approached the UN to recognise the genocide committed by Pakistan and hold it responsible. There is a long-standing demand from the people of Bangladesh to ask the UN to globally observe March 25 as National Genocide Remembrance Day. This effort will gain momentum next year.

The UN International Day of Victims of Genocide is observed on Dec 9, the day in which the intergovernmental organisation adopted the Convention on the Prevention and Punishment of the Crime of Genocide in 1948.