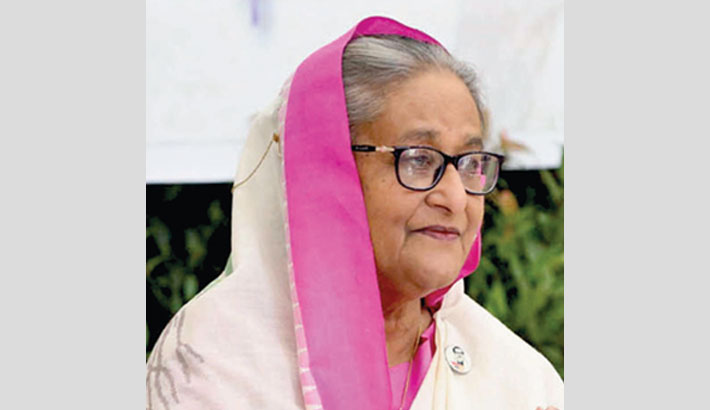 Prime Minister Sheikh Hasina on Sunday asked all concerned to conduct more research on medical sciences particularly on cancer as the people could get the desired healthcare services in the country.

“The scope of researches in our country is very limited. Especially research on the medical sciences is not adequate. But, it is solely necessary,” she said.

She said this while virtually laying foundation stone of the Kumudini International Institute of Medical Sciences and Cancer Research from her official Ganabhaban residence in the capital, reports BSS.

The prime minister also stressed the need for carrying out researches on cancer especially on how it spreads in the country’s environment, weather and climate alongside its treatment as the people could get quality healthcare services in the country.

She, however, said the people (physicians) who were supposed to conduct research on the medical sciences, have been passing busy days to see patients.

In this connection, she said, “There are very few physicians who have publication and research.”

She also said her government has set a target to establish a medical university in each division, adding that once the universities are built, the scope in conducting researches on medical sciences would increase.

The premier went on saying that her government has established many medical institutes after assuming office first time in 1996 and later upgraded those and set up more institutes while coming to power for the second time.

“I personally believe that doing research in the institutes is very much essential,” she said, adding that the people of the country would get standard healthcare services if researches are carried out on larger scale.

She added that Bangladesh has progressed one step forward in health sector with laying foundation stone of the Kumudini International Institute of Medical Sciences and Cancer Research and it will inspire others to join hands on the humanitarian ground.

The prime minister also hoped that the institute will play a pivotal role in conducting research on cancer.

Local lawmakers, mayor of Narayanganj City Corporation and ambassador of Japan to Bangladesh were present, among others.

A video documentary on the activities of the Kumudini Welfare Trust was screened at the function.

Sheikh Hasina said the Awami League government since its assumption has been encouraging the private sectors to set up the medical colleges and hospitals aimed at creating scopes to provide the countrymen with desired healthcare services.

She said, “You (people) know that we are establishing universities in each district both on the public and private initiatives. We are also building medical colleges. We are also taking measures to make sure of their qualities.”

The prime minister said her government has been making tax free or reducing it for importing medical equipment required to establish medical colleges and hospitals as the private sector comes forward in the endeavor.

She said her government also did everything for providing the best treatment to the children, adding that she made tax free to import incubators.

For such an initiative, she said, many quality medical colleges and hospitals have been established in the country.

She, however, said the Kumudini Welfare Trust founded by the philanthropist Ranada Prosad Saha also known as RP Saha has been playing a pioneer role to this end.

The premier extended her heartiest greetings to the family members of RP Saha for continuing his humanitarian works till the date and recalled some of her sweet memories with the Saha family.

Sheikh Hasina said Father of the Nation Bangabandhu Sheikh Mujibur Rahman liberated the country for giving the people a beautiful life with ensuring all the basic needs such as food, education, treatment, housing and clothing.

The prime minister said her government has been working tirelessly to accomplish the desire of Bangabandhu.

To reach healthcare services to every doorstep, she said Bangabandhu had taken an initiative to establish a 10-bed hospital in every union and her government has been working relentlessly to fulfill his (Bangabandhu’s) aspirations.

The prime minister reiterated her call to follow the health guidelines properly that included wearing facemasks and washing hands even after getting vaccinated.

She however said that the eagerness relating to taking the Covid-19 vaccines has been showing an increasing trend referring to the fact that 1.94 lakh people had received the vaccine yesterday (Saturday).

“We have taken all the measures required to tackle the coronavirus and for that reason we have been able to bring the pandemic under control,” she added.

In this connection, she said her government has appointed 2000 physicians, 6000 nurses and technicians within seven days to effectively fight the coronavirus.

The prime minister said her government has purchased 3.40 crore doses of vaccine from India while the Indian government has given Bangladesh 20 lakh shots of the vaccine as a gift.

Many other countries have been showing keenness to give vaccines, she said, adding that her government will also receive the vaccines mainly to make all the countrymen vaccinated to get rid of the Covid-19 pandemic.