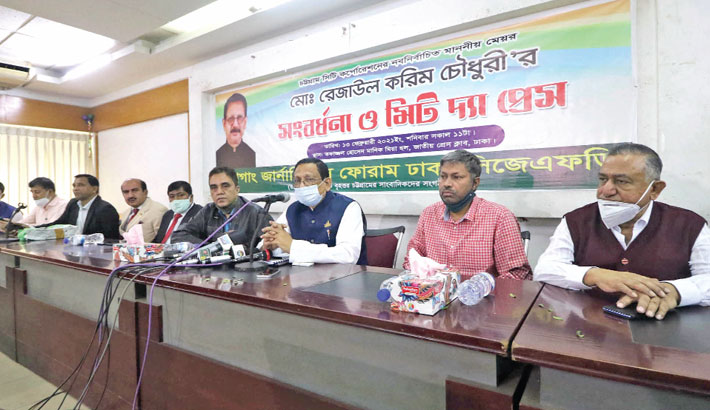 He made the pledge while speaking at a function at Jatiya Press Club in the city, organized by Chattogram Journalists' Forum, Dhaka (CJDF).

“We want to ensure participation of every section of the society and consult experts for ensuring sustainable development, because one-sided development plan dictated by the Mayor does not suit public demands,” CCC Mayor Rezaul Karim said.

Detailing his development plan, the mayor said he would address some major problems faced by the port city dwellers under his short-term plan while and his long-term plan is to develop the city as a hub of tourism, trade and culture.

Solving problems like mosquito menace, waterlogging, mismanagement of waste, and preservation of history and heritage of Chattogram would be the priority of the new Mayor, Rezaul said.

“The city has many historical places of many revolutionists of British and memorials of freedom fighters. I want to present these to our young generation through proper preservation,” he added.

Admitting the limitation of the mayor, he said coordination gap among utility agencies is causing misuse of public money and stood out as a major challenge for the Mayor.

“In the past, coordination meetings were arranged but had no positive results. Chiefs or officials with equal status of service agencies remained absent and used to send representatives who could not give any decision,” Chowdhury also said.

He assured of making the service agencies and officials more accountable.

Outlining his first 100 days’ plan in the office, he said, “Mosquito became a terrible problem for Chattogram, I want to give city residents 80-90 per cent relief from the menace. I will also be attentive to cleanliness and road reparation works.”

“We need re-excavation of canals. Most of the canals are filled up and went to the grip of grabbers. These canals will be recovered from the grabbers. The canals don’t belong to any individual,” he added.

Speaking on the occasion, Daily Sun Editor Enamul Hoque Chowdhury urged the newly elected mayor to look into the reasons behind the delays in the implementation of many development works in Chattogram.

“The government has taken many development projects in Chattogram but it is taking time to implement those for many reasons. I request the mayor to take care of the projects,” said Chowdhury, also the founding president of the CJDF.

He also assured the mayor of extending all-out support to build Chattogram as a model city.

Rezaul Karim Chowdhury was elected in the CCC election held on 27 January with the ticket from ruling Awami League.

He was sworn in by Prime Minister Sheikh Hasina on Thursday.