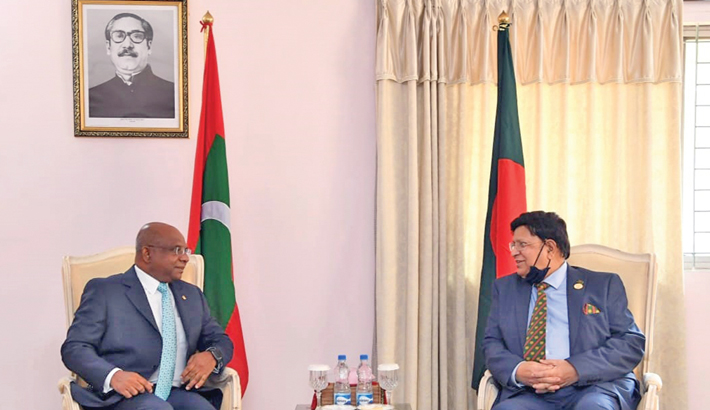 The four-day visit of Maldives Foreign Minister Abdulla Shahid to Bangladesh has taken the relations between the two countries to new heights.

During the official visit, he discussed many issues with his Bangladesh counterpart Dr AK Abdul Momen and was present when representatives of Bangladesh and the Maldives signed two memorandums of understanding (MoUs).

The first MoU was signed to provide a solid framework for the recruitment of human resources from Bangladesh as the Maldives has decided to take more doctors, teachers and skilled manpower for different sectors of the country made up a group of islands spread over the Indian Ocean.

The two countries agreed to expand connectivity, trade and investment and strengthen the existing ties in the areas of health, medicine, education, human resources, defence and others.

At a joint press briefing following the bilateral talks at state guesthouse Padma in the capital on Tuesday, Bangladesh Foreign Minister Dr Momen said, “We had good discussions in a cordial atmosphere. We’ve agreed on many issues. Hope, we’ll have better days.”

“We’ll send some nurses to help carry out vaccination in the Maldives, particularly for the large Bangladeshi community staying there,” he said.

Abdulla Shahid said his country will continue its all-out support for the repatriation of forcibly displaced Rohingyas to Myanmar. “[The] Maldives always advocated for the rights of the Rohingya people, and together with the government of [The] Gambia, we seek accountability for the acts of genocide committed against the Rohingya people.”

He expressed gratitude to Bangladesh for its contributions to a variety of fields, including training and scholarship, health and medicine, defence and other technical areas of his country.

Dr Momen said President of the Maldives Ibrahim Mohamed Solih would visit Dhaka to attend the Mujib Barsho functions and the golden jubilee programme of Bangladesh’s independence responding to the invitation of President Abdul Hamid.

Abdulla Shahid said the Maldives President has already declared that all the workers, including foreigners, will get free vaccination.

President Abdul Hamid told the Maldives foreign minister that the Maldives is Bangladesh’s tested friend and Bangladesh always emphasises on developing relations with the island country.