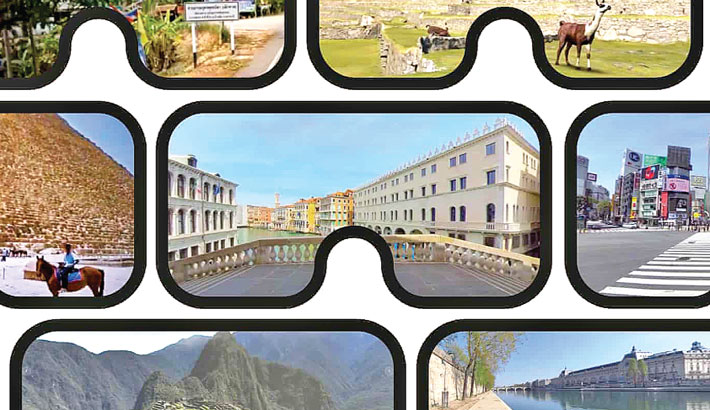 With globe-trotting banned in the pandemic, increasing numbers of people are turning to virtual reality to relieve pent-up demand for travel.

Escapism from the sofa through a growing range of VR travel experiences is whetting appetites for post-pandemic holidays and could be a watershed moment for the technology in tourism, say analysts.

“As long as the pandemic increases and we are spending more time indoors, we should see adoption keep on growing,” said Ralph Hollister, a tourism analyst at Global Data and the author of a recent report on VR in tourism.

Oculus launched its Quest 2 headset in October and the most popular experiences include National Geographic VR, which takes users to places such as Antarctica – where they can navigate icebergs in a kayak, climb an ice shelf and survive a raging snowstorm as they search for a lost emperor penguin colony.

Another app, Wander, can teleport VR travellers from the pyramids of Egypt to the gardens of the Taj Mahal, while Alcove offers immersive experiences from hot air balloon rides to city tours.

When We Stayed Home takes travellers to the heart of Paris, Venice, Jerusalem and Tokyo as they largely are today. Through the eyes of a local, you can witness the calm, the beauty and the emptiness of a places on pause during April 2020.

“In this time of social distancing, people are looking for different ways to stay entertained, connected and active, and VR offers that,” said an Oculus spokesperson. “Whether you want to transport yourself to different places in the world, play with friends, get fit or just hang out together and feel like you’re in the same room, people are realising they can with VR.”

One prominent adopter of pandemic VR is Germany’s national tourist board, which has unveiled a number of immersive projects. The Maldives Marketing and Public Relations Corporation is using VR to showcase experiences such as beach yoga and snorkelling.

Hollister said VR was still seen as a gimmick. “It remains to be seen if increased usage will last beyond when meaningful travel resumes.” But he believes it could.

“I think the increase will be sustained, especially with the Gen Z and millennials in coming years, as they move into higher-paid jobs, and marketers take them moreseriously as a consumer group. They will not feel alienated by the technology,” he said.

Currently, VR is used in the pre-trip “dreamer” stage in tourism, with people looking at where they might want to go. Among the tourist operator Kuoni’s offerings, potential customers can take a 360-degree tour of the upmarket Sandy Lane luxury resort in Barbados.

Hollister predicts that in the future people could use VR to book trips directly, as well as choosing seats on planes and hotel rooms with a click of the controller.

“A lot of travellers and consumers want a seamless experience, to go from looking to booking with minimal clicks, instant gratification and saving as much time as possible,” he said.

It has its limitations. ‘Tourism is also about touch, taste, smell, all those other sensory experiences, which is something VR cannot do,” he said. The price of high-quality headsets restricts access too.

But as the world seeks more sustainable tourism, Hollister said VR also offered a solution. As historic sites are damaged through mass tourism, recreating them in VR could help conserve them.

So this could be a watershed moment for VR and travel. “Everyone will be analysing that and working out its real worth to the industry,” he said.

‘More immersive than I could have imagined’Angel Ross hoped to be travelling this year – and he has. He’s been cage diving with white sharks, kayaked in Antarctica and played poker in China – all virtually.

Ross, who works for a London-based marketing firm, invested in an Oculus Quest 2 in January to satisfy his wanderlust after finding himself “stuck at home with the winter getting a bit depressing”.

He said: “I love travelling. I am 22 and these are the years when I have been wanting to do a lot of things, and obviously can’t do anything right now. I love the ocean and I love snorkelling. On the Oculus you can dive with all these different animals, and it’s super immersive and realistic.

“There’s a great white shark, you can get in a cage and it comes up to you. It was pretty terrifying but amazing. Then there’s more friendly animals like dolphins you can play with. I’ve done all of them, pretty much.”

To make it more inclusive, he can cast what he is seeing on to his computer or TV to share with friends. “You feel quite disorientated when you come out, because you are really tricking your brain to think you are there,” he said.

On the National Geographic VR app, he went on an Antarctic adventure. “I saw whales, I was in a kayak and you can climb an ice shelf. You really feel like you are walking and moving and going somewhere. All your senses – obviously not smell and touch – feel they are being completely absorbed.

“I am a big poker player, with friends and not for money. And the poker on there is incredible. You can go to all these different locations. And one is this Chinese rooftop garden pool. Really cool.”

He has also been rock climbing in the Alps, “which is super realistic – you chalk your hands and you can look around and see the drop. Pretty insane.”

On YouTube VR he went in a drone up to 40,000ft to see the curvature of the Earth. “It’s even more immersive than I could have imagined. One hundred per cent,” he said .

“Because it’s so immersive and intense, you can’t sit on it for hours on end. You need breaks. So, you can have an intense, fun experience and do so many different things, invigorate your senses. And then you just stop, have a break. And you don’t need that constant fix.”