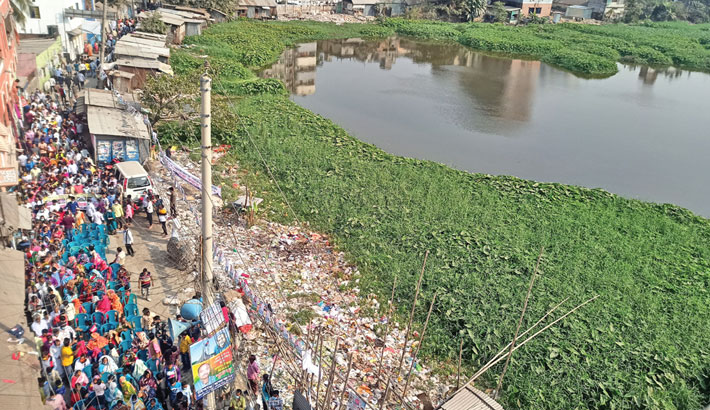 Local people on Saturday vowed to reclaim the property of a Hindu temple reportedly grabbed by Narayanganj City Corporation (NCC) Mayor Dr Selina Hayat Ivy and her family members even at the cost of their lives.

They made the promise at a rally organised at Deobhog in Narayanganj city protesting against the grabbing of the Debattar (endowed) property worth about Tk 100 crore by the mayor and her family members.

Leaders of Hindu, Muslim, Christian and Buddhist communities spoke at the rally held under the banner of District Hindu Community.

The speakers criticised Ivy for demolishing a madrasa, historic Rahmatullah Muslim Institute and classrooms of Bangabandhu Govt Primary School and her other controversial activities.

The temple is a holy place for members of the Hindu community, he said, adding that Vikon Lal Pande dug a pond on 367 decimals of land for the convenience of the Hindu devotees and people of the nearby area which is known as ‘Jiur Pukur.’

But now, Ivy and her family members are demanding that the property of the temple belongs to them, Dr Nim said.

“The encroachment on the temple property is a criminal act. The existing law bans the sale and purchase of ‘Debattar Property’.

But Ivy and her family members are making evil attempts to grab the land by making forged deeds,” he said.

The Oikya Parishad leader said they have already submitted a memorandum to Prime Minister Sheikh Hasina through the deputy commissioner of Narayanganj seeking her intervention to save the property from the clutch of Ivy.

He said they (Hindu community) are prepared to lay down their lives to protect the temple and its property from encroachment.

Speaking on the occasion as the chief speaker, Nirmal Kumar Chatterjee, general secretary of Bangladesh Puja Udjapan Parishad, said the property was recorded in CS record as endowed property. “Family members of Ivy began to grab the property since the regime of Ziaur Rahman,” he said.

Advocate Khokon Saha, general secretary of Narayanganj city unit of Awami League, said Mayor Ivy filed a case against him under the ICT Act as he raised voice against encroachment on the temple property.

He then showed six forged deeds that Ivy and her family members made to garb the land. Chandan Shil, president of Narayanganj chapter of Ekattorer Ghatak Dalal Nirmul Committee, said the dream of Ivy to grab the temple land will not come true.