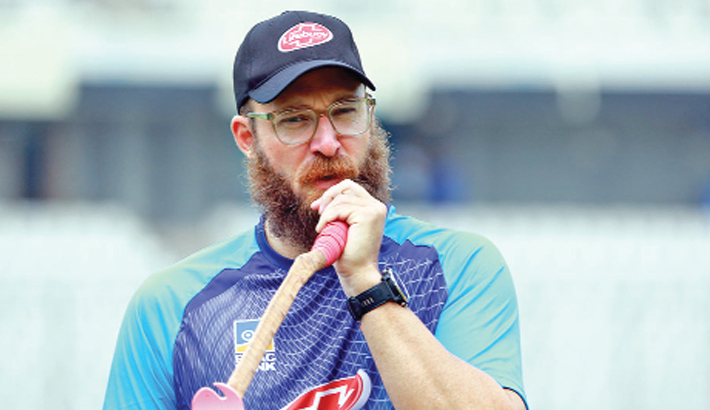 A Bangladesh Cricket Board official on Thursday said that their spin consultant Daniel Vettori will join them in Queenstown during the five-day training camp ahead of the upcoming white-ball series against New Zealand.

BCB cricket operation chairman Akram Khan confirmed to The Daily Sun that they are expecting Vettori to join them after they complete the quarantine period.

“Vettori will join us when we will end the quarantine and free to practice and he will surely be in Queenstown when we have that camp,” Akram said.

Earlier, New Zealand Cricket informed that they have pushed back their forthcoming home series against Bangladesh by a week due to the ongoing challenges in the Covid-19 environment.

Bangladesh, who were set to start their series, consists of three ODIs and as many T20Is on March 13, now will begin on March 20.

“The change in the schedule is caused by ongoing challenges in the current Covid-19 environment and the need to allow the visiting side’s adequate preparation for international commitments,” said NZC in a statement.

“To accommodate the necessary logistics, the Bangladesh tour will now begin seven days later than initially scheduled, following a five-day training camp at Queenstown, with matches to be played at the venues first planned, but on different dates,” it added.

The three ODIs were supposed to be played on March 13, 17 and 20 and it will now be held on March 20, 23 and 26 in Dunedin, Christchurch and Wellington respectively.

Vettori did not join Tigers in the ongoing home series against West Indies due to Covid-19 restriction while he is yet to complete 40 days at the office of the 100-day contract between him and BCB.

BCB is confident that Vettori will complete the remaining 40 days of his tenure as they wait to decide on the contract extension.

Vettori took charge ahead of Bangladesh's tour of India in November 2019 and his contract was originally scheduled to run till 2020 T20 World Cup in Australia, which was rescheduled later on.

Tigers’ series against the Kiwis will be their first tour in New Zealand following the Christchurch terror attack on March 15, 2019. The team narrowly escaped the gunman who targeted two mosques in the city and killed 51 people.