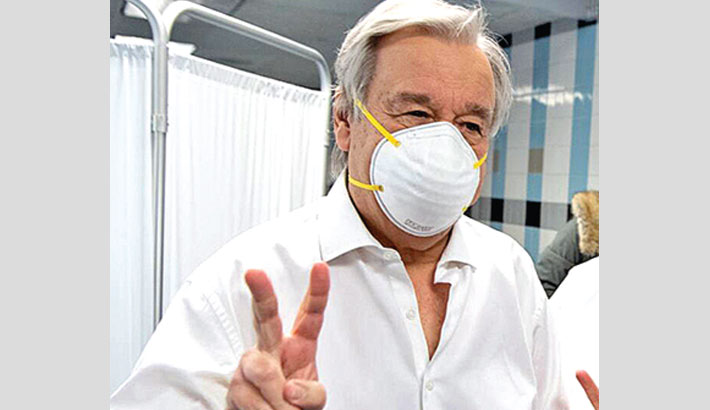 India's vaccine production capacity is one of the best assets the world has today, UN Secretary General Antonio Guterres has said as he applauded India for supplying coronavirus doses to nations around the world to combat the catastrophic global health crisis.

“I think that the production capacity of India is one of the best assets the world has today, and I hope the world understands that it must be fully used,” the UN chief said on Thursday at the United Nations headquarters in New York.

He was responding to a question by PTI Correspondent Yoshita Singh during a press briefing on India helping countries around the world in the fight against the global pandemic by supplying COVID-19 vaccines.

“I would like to say how much we count on India. I mean, India has one of the most advanced pharmaceutical industries. India played a very important role in the production of generics for use that was outside... a very important element of democratisation of access to medicines all over the world,” Guterres said.

"And we strongly hope that India will have all the instruments that are necessary to play a major role in making sure that a global vaccination campaign becomes possible," he said.

The UN Secretary General added that he reiterated during his briefing to the UN Member States on his priorities for 2021 that licenses should be made available for companies around the world to be able to produce some of the vaccines that already exist.

India has airlifted more than 6 million COVID-19 doses to nine countries, including ‘2 million doses to Bangladesh as a gift’, in Phase-I under its initiative termed "Vaccine Maitri".

India also started contractual supplies of vaccine to various countries in a phased manner and Bangladesh received 50 lakh doses of vaccine under an agreement in the private sector.

In a Tweet, Guterres expressed his gratitude and good fortune at receiving the jab, and urged the international community to ensure that vaccines become available to everyone, on an equitable basis. “With this pandemic, none of us are safe until all of us are safe,” he wrote.

71-year-old Guterres was eligible to receive the vaccine on the basis of his age: New York residents over the age of 65 are included in the current phase of vaccinations in the city, which also includes school workers, first responders, public transit workers and grocery workers, reports UN News.

In December, Guterres declared that he would happily receive the vaccine in public, and said that, for him, vaccination is a moral obligation: “Each one of us provides a service to the whole community,” he said, “because there is no longer a risk of spreading the disease.”

Journalists and camera crews were invited to observe the UN chief receive his shot, which took place at a time when many countries are seeing a significant proportion of their citizens expressing “vaccine hesitancy”.

UN regional offices have noted a significant level of mistrust and, in some countries, including Japan and several European nations, around half the population are reportedly unsure about getting a COVID-19 vaccine at this stage.

Commenting on the UN chief’s vaccination appointment on behalf of the Mayor’s Office, Penny Abeywardena, Commissioner for International Affairs, said that she was heartened that the Secretary-General had secured his appointment online, and received the vaccine in a New York City public school, in the same manner as many other city residents.

“This will go a long way in building trust in our communities that the vaccine is safe for all,” she said.